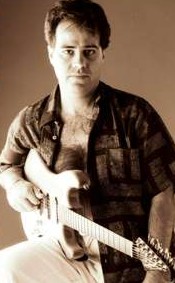 Born November 4th 1965, Fabio Serra started developing his musical passion during early childhood. His family helped him a lot keeping the music as important part of their life.

The first instrument Fabio was experimenting with was his grandfather's piano. At the age of 6, he discovered music of The Beatles. Fascinated with the group, he started playing the guitar. This instrument became his favorite and now he is using it almost exclusively. Between the age 13 and 20 he studied jazz and rock guitar. He also played with several local bands, becoming a fan of Progressive Rock and the group Genesis. At that time this group influenced the style of music he played. Later on Fabio was also experimenting with other kind of music, from A.O.R. Jazz/Fusion to New Wave.

In 1986 he recorded his first studio work as a guitarist with the experimental band Konya Dance. Meanwhile he get involved with midi recordings and computers because his interest shifted more into the writing and producing, rather than just performing. In 1987 he started to collaborate with Ragtime Records studio in Verona, as arranger and musician. At that time he met there Johnny di Martino. During his work in Ragtime Studio, he has been contacted by Farina & Crivellente who asked him to join them to work in Factory Sound Studios. In the late 1989 he started working on many High Energy tracks for Alfa Records. After few months he actually joined Factory Sound Studios. That is how the ultimate Factory Team was born. The Factory Team's sound grew up during the years. Guys were working on different projects and were facing different styles. Their touch is now well known and is part of professional evolution during their tenure years in SAIFAM. He contributed to many hits such as :

A Kay B Jay - Love Reaction
Amos - Only Saw Today
Angelo Maria Morales - Pretty Babe
Bronski Beat - the Rainbow Nation Album
DJ Miko - What's Up
Dandy - Girl I Love You
Delegation - Encore Remix Album
Double Impact - House Traxx
F.C.F. - Baby No!
Heartclub - Everlasting Groove
Housecream - Get Me Into Your Heart, Lonely Mind, Dance Boom Boom, You Get My Heart, Piece Of My Heart
Kate Project - If You Can Say Goodbye, Baby You Can Help Me
Libra - Another Night, Dreaming Of You
Mark Farina - Killer
Mistery - Toc Toc, Never Fall In Love Again
Oscar - Gimme Your Body
Purple Beat - Don't Stop 'til You Get Enough/Time to Party Now
Radiorama - Little Bird, It's A Lonely Wait
TH Express - Missing in the Rain
T-zone - Don't Let Me
Wildside - In My Arms

G.T. Master - Never Ending Story (F. Serra Edit)
Radiorama - Give Me The Night (Fabio Serra Remix)
Real To Reel - Can You Feel It (the remixes)
Thelma Houston - Don't Leave Me This Way (Factory Team Mix)
Workin' Happily - Make My Love / (Can You) Hear The Music (2 AM Mix, 7 AM Mix and Prize Mix)