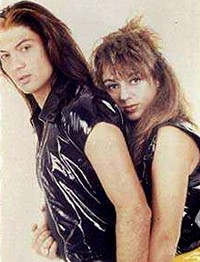 Records company : SAIFAM Publishing Group. Radiorama's first release, Chance To Desire is dated 1984 and was result of co-operation with Martinelli. This track had an incredible success in the clubs in Germany and Switzerland (where it peaked up up to #18). It featured Simona Zanini (who had also cowritten the single) along with Hank Schostak (who also appeared on the first album track Watcha Gonna Do).

The second one, Desire, published exactly on Christmas eve, was the Radiorama's gift for all lovers of Italian discomusic. The idea for this record was taken from the maniac of Florence, who terrorised the lovers in Tuscain. The results was a kind of horror film sound track, but on trail of Italian melodies. It was once again a success in Switzerland, reaching #17.

From Desire, all the songs have been written and produced by Farina-Crivellente, along with Paolo Gemma. Their success began with these two titles and with all their songs they entered all the charts world-wide. Vampires was #7 in Switzerland. One of their most famous song was Aliens, that reached top ten of all European Hit charts (for instance, #5 in Switzerland). With the first album Desires and Vampires in 1986, they have entered the Hit charts in numerous European countries and became famous worldwide. At that time they started their tours.

After a break, they started producing again in 1990 with Farina-Crivellente, the producers that were responsible for their success. In 1993, they released Your Love as vinyl. It contained 4 versions : Factory Team Edit, Bernd HSB Edit, V.D.A Edit, and Full Power Edit. The song was written and composed by M. Farina and R. Stecca, published by S.A.I.F.A.M/Mela Music, produced by ZYX Music, label: 21st Century Records

Both released in 1995 : Little Bird and Let Me Be were the follow-up singles. Then came Touch Me Now and Like An Angel the following year. All of the were excellent eurodance tracks. 1997 saw the release of 2 singles : 'Cause The Night (already released by eurobeat project Sarah) and Di-Da-Di

1998 : after a 2000 remix of Alien, the group released several new tracks. Give Me The Night, then Beautiful Man were on their way to become club hits. In 1999, the single More Time was released, followed by the famous Ninna Ninna Oh, featuring the voice of the TH Express vocalist.

Radiorama's last single to be released under the label 21st Century was Total Eclipse Of The Heart in 2002. It featured vocals by Melody Castellari.

Simona Zanini was Radiorama's vocalist on the first singles released (for instance, Chance To Desire). Cristina Dori took part to the track It's A Lonely Wait. It more than probable that Clara Moroni was featured on Fire, ABCD, Bad Boy You, 3 4 Gimme More. The female vocalist officially presented during the 90s period was Antonella Ferri, 25 years old, born in Milan. Her eyes are brown, she plays keyboards. She likes rice and Margarita. Her favourite color is black. She likes riding and owns a horse. Her favorite music was jazz. Melody Castellari could the the voice on Total Eclipse Of The Heart.

Aldo Martinelli did the male vocals on the first Radiorama release Chance To Desire. Then Mauro Farina replaced him on the following singles. The official male vocalist in the 90s was Angelo Morales, 26 years old, born in Venice. His eyes are green, he plays sax. He likes pizza and gin fizz. His favorite color is blue. He likes rifting and latino music. It is more probable that he was only a dancer on stage, and that vocals were still done by Mauro Farina himself.

The other vocalists who contributed to the project (on the album World Of Radiorama) were Jakie B., Juliet, Ricky H., Fabio Serra. Rumors also talked about 2 others : Manuella and Umberto.

SAIFAM
Thanks to DJ Stakan, Klems, Gianni and Sacha Busch