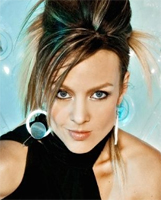 28/07/2018 : Fey's new single is entitled No Te Necesito. Videoclip was directed by Antonio Roma, produced and edited by David Roma

17/02/2016 : Videoclip for Fey's current duet with actor Lenny dela Rosa No Me Acostumbro is out. It was shot in Acapulco beaches (Mexico)

She was born María Fernanda Blázquez Gil in Mexico City on July 21st, 1973, from a Spanish father Fernando Blázquez and an Argentine mother Carmen Josefa Gil. Fey is not the only artist in her family, she is the niece of Argentine pop duo Gloria y Noemi Gil. She spent almost her entire childhood in Spain. She has sold over a million records in her native Mexico and around 10 million copies around the world. She is a vegetarian.

Fey released her first album, titled Fey, in 1995, on the Sony Music Mexico record label. It was produced by José Ramón Florez. Within a couple of months of the album's release, she had scored several hits in her native Mexico, reaching #1 with Media naranja, Gatos en el balcon, Me enamoro de ti and La noche se mueve.

Gatos en el balcon talked about two kids who are in love, the term "cats" is used in Spain to refer to jobless who don't do anything productive for their lives and go wasting their time. But most thought it referred to the animal, so Fey eventually decided to use this cat concept for the her tour dancers outfits in "The Color of Dreams" in 1999 and 2000 tours.

After a massive tour in Mexico, including consecutive concerts in the Teatro Metropolitan (one of Mexico's well-known auditoriums), she toured in all of Latin America, and reached Gold status sales by the end of the year.

In 1996 Fey released her sophomore album Tierna la Noche, which brought her to worldwide fame. Azucar Amargo, the CD's first single, stayed in the Billboard chart for more than 30 weeks. Her tour, Tierna la noche, was also very successful. Overall the tour consisted of more than 40 dates in Mexico, the U.S. and Latin America, as well as some presentations in Europe.

In 1998, and after more than 8 months of absence, Fey released her third album El color de los sueños, a mix of different rhythms and styles differing from the 2 previous album. Ni tu ni nadie, the album's first single, instantly reached #1 in the Latin charts. Diselo con flores, Canela and Cielo Liquido soon followed. Although the record did very well in sales, it did not compare to the over-the-top success of Tierna la noche.

After almost a year of promotion and platinum record sales, Fey announced, in a 1999 charity concert, that she retired, explaining that "everything has a cycle, and this is the end of mine". 3 years of silence followed.

Fey returned in 2002 with a new album called Vertigo, a renovated image, and a new management team (Rebeca Mostow for the Anglo market and Octavio Padilla for Latin America market). Epic Records was to release this album in the UK, then in Germany, France, Asia, and in the US. Fey announced in "La Taquilla" (Exa FM radio show) that her first stop was the UK, then she confirmed that Sony Music Germany was preparing promotional work in that country for her English album. And she said that her songs from this album were being released in clubs to get her known. Vertigo, which wasn't as successful as the past albums, reintroduced Fey to a more grown-up crowd, which had waited four years for her return. Vertigo was recorded in English, and it was produced by Graeme Pleeth and R. Jazayerí, released as a double edition with both an English and Spanish album. The English album contained three more songs than the Spanish version. After 2 singles (The Other Side and Dressing to Kill), Fey left Sony and then did a two years pause.

2004 : Fey got married and relaunched her career with a new album La Fuerza del destino (a tribute to the Spanish group Mecano). This album was a success with the three singles La Fuerza Del Destino, Barco a Venus and Me Cuesta Tanto Olvidarte. Also for December holidays the track Un Año Más was released on radio in Mexico.

Fey toured in support of this album at the Viña del Mar festival 2005, the Selena Vive! festival, and many local clubs across the United States and Latin America. The record did amazingly sales-wise, and it gave Fey her very first Latin Grammy nomination for "Best Pop Female Vocal Album". As well she did it with 4 nominations for Premios Orgullosamente Latino 2005 & 2006-Ritmoson Latino and a Premio Oye nomination. She was recognized by the Gay & Lesbian Alliance Against Defamation (GLAAD) in Miami in 2006, thanks to the success of her Tour on gay discotheques in the United States in places such as: New Jersey, Chicago, Miami, San Antonio, Dallas, San Francisco, Los Ángeles, etc. by supporting gay human rights.

Fey's sixth album was called Faltan Lunas and was produced by Carlos Jean. It was slated for an August 1th, 2006, release, but was released on July 21st, Fey's birthday. It featured a pop/dance sound along with acoustic elements. The first single released was Y Aquí Estoy. The album flopped. It was released only in few countries of Latin America, selling only 10 000 copies worldwide, making it her lowest selling album ever. It was announced by Fey herself that the second single would be Me has vuelto loca, but it was changed to Como un Angel. Released in January 2007, if made no impact. Fey then left EMI and announced she would record her next studio album for an independent label.

As of June 2008, Fey gave an interview to her fans through Fey Station, confirming she was working on a new album where she would have complete creative control. Dulce Tentación was released April 28th, 2009, and the English version called Sweet Temptation was set to be released over the next months. The album was produced by Sam 'Fish' Fisher, who also co-wrote half of the songs on the record and was distributed internationally by Universal Music. One track, Cicatrices ( "Monsters") was available for download on Fey's official site at the end of 2008 and recorded more than 170.000 downloads.

2009 : the first official single was Lentamente (Let Me Show You), a song that put Fey back in the top of the charts in Mexico. The album was an unexpected success, winning a gold status for over 50.000 copies sold in less than one month in Mexico. The second single Provócame (Games That you Play) was released in July 2009, however, a conflict between Fey and her new record label Mi Rey Music over promotion differences and the concept of the new video led Fey to part ways with the record label.

Over the first days of August loads of rumors surfaced on the internet about Fey being resigned with her old record label Sony Music, label that already bought her catalog owned by EMI music, and supposedly would re-release her current album, Dulce Tentación. These rumors turned out to be false, since Fey decided to create her own record label Gil Producciones, by buying the rights to her music and to Elephant Music from Mi Rey Music. Late August 2009 Fey announced on her website that she was now in complete control of Elephant Music and continued to promote Provócame.

The song, written by Fey herself, was a dance-rock surprise, far the sweet image which fans were accustomed to. She had to suspend promotion of the single due to laryngitis. The video was released on September 21, 2009. A live DVD is also planned. The "Mexican Kylie" has already toured in clubs all over the United States and is set to begin her Sweet Temptation World Tour in November, 2009.

2010 : in April 2010 Fey announced that she was in studio recording her 8th studio album, with a planned lead single entitled Te Amo A Mi Manera. She married Alonso Orozco in August.

2011 : in January, Fey gave birth to a child named Isabella

2012 : in June, Fey gave a private acoustic concert in Mexico City, part of the Sony "Primera Fila" series, in front of 600 of her most loyal fans. She sung her greatest hits, as well as new tracks such as Frio, which is set to be released as a single in September, and a duet with Aleks Syntek on El cielo puede esperar.

Listen to Fey on Radio Euro Classic, the eurodance radio