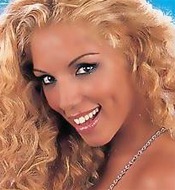 17/08/2020 : On August 15th and 16th, Rebeca shot the videoclip for a new song in Barcelona. Director is as usual Salva Musté, title is still unknown but it should be included on the forthcoming album that will celebrate her 25 years of carreer.

28/04/2020 : Rebeca, Marian Dacal, KU Minerva and Lydia formed project Queens of 90s. Their first single I WIll Survive will premiere today on Youtube at 14:00 (Paris time)

01/11/2018 : Rebeca's next single will be entitled Carrusel and it was composed by William Luque and produced by Abel Arana.

She started her career in 1995 with the single Más que un engaño, arranged by Xasqui Ten (Speed Limit, Scanners, Essential, XTM). The label Max Music wanted to create a eurodance project with very catchy tunes and powerful music. She started a tour (Super 1) with the most important Spanish TV radio, 40 Principales, and soon arrived another great single, Corazón Corazón. Rebeca appeared in many TV shows, and launched her first LP, simply entitled Rebeca, with a new single (her biggest success, it's in every Spanish karaoke!) that went #1 in Spain and Mexico. The album sold more than 200.000 copies and gave birth to 3 other singles: Sólo amante, Cállate Ya and Piano Piano. She also appeared in the film Una Pareja de Tres.

Afterwards Rebeca released her second album Rebelde (1998). It sold more than 50.000 only in Spain, and made that Rebeca turn into Sandy in the Spanish musical Grease, the Original Sound Track of the Spanish act sold also 50.000 copies.

Rebeca left Spain and took her songs to America. Grandes Éxitos was the title of the album she released on the American continent (USA, Colombia, Venezuela, Mexico...) and there she also became popular. She recorded new songs with a latin touch, such as Mi forma de vivir, Yo soy Buena... were mixed with the great success of the well-known song Duro de pelar.

Brava, her third album, came in 2000, and it was also published in Spain. Then came Supernatural her 4th album. The song Tatuaje could be heard in the Spanish TV show Big Brother (Gran Hermano) and popularity came back to Rebeca. She sung with latin singer Innis the song Eres tú, and released two new singles for the summer of 2003: Eso no es amor and Calor.

In 2005 Rebeca took part of the reality TV show Aventura en África (the Spanish equivalent of the UK show called I'm a celebrity Get me out of here!) and she stayed till the 4th position. When she was out of the jungle her most popular song was re-released: Duro de Pelar Africa Remix 2005, and another Greatest Hits was launched in Spain at the end of the year: Lo Major de Rebeca.

2006 : Rebeca sent 2 songs in order to represent Spain in the Eurovision Song Contest. Unfortunately Las Ketchup were selected, and one of the songs sent (Lo Prefiero) was re-recorded by another singer. But, the other one, Qué No Daría Yo is now released by Rebeca and included in a Spanish summer compilation, Disco Estrella vol.9. The song starts slowly like a ballad, and it becomes early a great dance track with very commercial vocals and catchy tunes. The CD has sold over 100 000 copies in Spain.

2007 : Rebeca was selected to take part to the TV show "Misión Eurovisión" in order to represent Spain in the Eurovision Song Contest 2007. Futhermore, her song, I Love You Mi Vida has also been selected among more than 1000 songs that were sent to TVE. Rebeca herself was not selected as a singer (she stood 10th in the semifinal of Spanish TV show "Misión Eurovisión) but the boysband group Nash sung the song. Rebeca said she was preparing new material for a new record.

2009 : Rebeca tried to be selected to represent Spain at ESC with a rock track entitled Amor radical, but she wasn't selected.

2010 : Rebeca recently recorded a new album that will be out soon. The sound is announced to be eurodance... The first single is an uptempo song called Valentino Boy, with lyrics in Spanish and Italian. It has been included in the preselection of the Spanish song for the Eurovision Contest 2010.

In September, she has launched an advance of her new album : an EP with 5 songs: Matador, Valentino Boy, Much, Tu nombre and Se me olvidó. The new single is Matador, the video was shot in the disco "Cool" in Madrid.

2011 : Rebeca is adapting the 90's spanish eurodance tunes into new house music sounds. She tours in Spanish discos performing live with many DJs, and concerts (Orgullo Gay Madrid, more than 5000 people), becoming the the first Spanish vocalist singing house in her mother language.

Listen to Rebeca on Radio Euro Classic, the eurodance radio