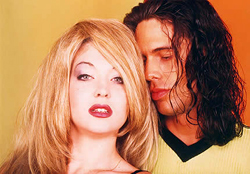 11/05/2000 : Wildside released today their new single In My Heart In My Soul. It's a very nice eurodance song with a touch of trance.

Wildside was created by SAIFAM Publishing Group. First Wildside single Love Makes Me High featured Livin' Joy vocalist Tameka Starr. She was credited and her face even appeared on the record's sleeve. The same year, a duet with MCD entitled Give Me Your Love was released.

Then came single My Body in 1994. It was written by M. Artusi, A. Stecca and D. Cirelli and featured vocals by Barbara Evans. Next single New Light was out in the same year. It was produced by brothers Fabrizio and Marcello Smania with R. Stecca and vocals were probably done by Cristina Dori.

In 1995, Wildside released 2 singles : Heartbeat (Be My Babe) (written by F. Serra, M. Farina and R. Stecca, probably featuring raps by TH Express rapper Ramses) and I Wanna See The Sun produced and written by F. Turatti and M. Farina.

In 1996, they decided to stop recording original songs and to start making covers. In May, One Of Us (Joan Osborne cover) was released. It was licensed in many countries such as UK, Australia and Spain. Then came Phil Collins' cover Dance Into The Light featuring Thomas (actually Vittorio Fraja ).

In 1997, Spice Girls cover 2 Become 1 was released. A performers duet (Italian male dancer Willy and Russian female dancer Tatj) was hired for live appearances and sleeves pics. The group kept on expanding the repertoire, this time with original songs (In My Arms, Open My Door, Take A Chance), and in September 1997 they released their first and only album 2 Become 1.

In 2001 Wildside released a track entitled Queen Of Love, for once not under the 21st Century label. It also appeared on the Dance On The Web 8 compilation.

2002 : after many artists including E-rotic, Wildside released a cover of Abba's hit The Winner Takes It All.

Afterwards, they recorded many tracks for the Japanese market that were featured on the Dancemania compilations : Heaven Is A Place On Earth, My Sweet Darlin', A Thousand Miles, Speed Japan, Santa Claus Is Comin' To Town, Irresistiblement, Asereje (featured by DJ Speedo)...

SAIFAM Website
Thanks to Thomas Spiegel, Bubblegumdancer and grof pl.

Listen to Wildside on Radio Euro Classic, the eurodance radio