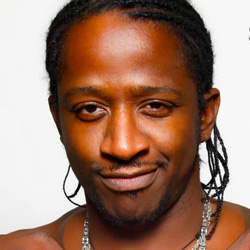 17/10/2020 : Tony T's next collaboration will be a single from DJ Combo, Sander-7 and DJ Nicolas entitled What U Need

06/10/2020 : Tony T was featured on Ramba Zamba's forthcoming single For The Ladies and on Sherman de Vries' single Freedom

03/08/2020 : Tony T was featured by Stephan F on his new single Criminal, and he directed the videoclip himself

Tony Dyer (aka AD Neal, Neal Anthony Dyer or Tony Tee) was born in London in 16.07.1970. He grew up in New York, then followed his mother to Germany in 1986. He is not only a rapper, but also singer, vocalist, producer and all style dancer.

He was rapper for many eurodance projects in Italy (mainly produced by F. Zafret) and Germany (for the labels Insania Records and Dance Master Records). But he actually never took part to Aso Mamiko and Valencia No Existe... His most famous contribution was with Beat System, not his best memory, since the producers spoiled him from his money part.

Tony currently lives in Wuppertal (Germany). He still does music, and tours in German clubs. He knows he will come back : "I have been waiting my whole life to show the world what I can do !" he says.

2006: Tony appeared on a track Was ist das Leben wert by German DJ, rapper and producer Klymax. The video was shot for this song, in which he also appeared.

2007 : Tony's new single is entitled Bad Boy. Then, he recorded the RnB track Don't Be Afraid.

2008 : Tony visited a track by Micha Moor Space. Then, the project RIO featured Tony Dyer on their last single Shine On, a nice summer dance track, which peaked #1 in many German dance charts and #2 in the European Dance Traxx. In October, Tony Dyer collaborated again with RIO on their new single When the sun comes down.

2009 : the new RIO single was entitled After The Love, oui in May. in October, RIO presented a new track entitled Serenade. It will be featured on their forthcoming album Shine On.

2010 : Tony and his current project RIO released a new single in August entitled Hot Girl. Videoclip was shot in Mallorca. In November, he did a special guest appearance in Cascada's videoclip Night Nurse.

2011 : in January, RIO released a new single entitled Like I Love You. in April, Tony Dyer was featured on Metaphysics' last single. RIO released a new album entitled Sunshine on May 13th under Tiger Records. Album contained the first singles as well as some new tracks. Their new single was entitled Miss Sunshine. Released the same day, it contained samples of Dance Nation's Sunshine.

2012 : in March, Tony announced that he was leaving RIO and was starting a new solo carreer. He shot an ad for Stephan Rauh jewels collection. His new single Way to Rio was released in May. Videoclip was shot in Cala Ratjada (Mallorca), it was produced by Stephan Rauh. Along with Markia, Infaas and Indira Joshi, were featured on Iraj's single Just 1 Click. He also did vocals on Soulwash's single No Games. He was featured on Today Darius & Finlay Phenomenon. The videoclip was shot in Mallorca, it was directed by Stefan Adelsberger and produced by FSM and Twister Filmproduktion.

Thanks to Daniel Peyer and to reBeL, Klems, Anton "MC Ka$per" Skaletsky, Tavi Meran, DJ Dusty from WebDJs, D-Man94, Kalashok and "Necronomic" Jury Galimov
Thanks to Tony T himself