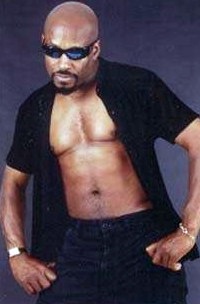 Delegation, one of the UK's leading soul/funk acts have successfully stood the test of time since their inception in the mid-1970's. Beginning their career as a three-place vocal group in the tradition of the most successful USA soul acts founder and leader Ricky Balley has guided the group, through several personnel changes, into one of Europe's most respected bands.

Ricky Bailey was born in Jamaïca and spent his early childhood years growing up there before moving with his parents to the UK. His passion in life had always been singing and in the early 1970's he put together his first group - The Five Star Cadets - in his home town of Birmingham, England. Gaining much experience from his live work with this group he eventually founded Delegation in the mid-1970's with two other singers from Birmingham - Len Coley and Roddy Harris. It was with this line-up that Delegation first came to the attention of songwriter/producer, Ken Gold who had been searching the UK for a three-piece soul act following the massive success he had achieved with another UK act, The Real Thing. After seeing them perform live, he immediately secured them a recording contract with State Records in the UK and their first record, The Promise Of Love was released in the surnmer of 1976. Although the record received good reviews and airplay, it was not until the release of their second record Where Is The Love (We Used To Know) that Delegation achieved chart status in the UK.

Following the success of Where Is The Love the group toured Europe extensively gaining the respect of audiences wherever they appeared and during 1977 their third single You've Been Doing Me Wrong was released, giving them their second hit in the UK. At this point Roddy Harris quit the group and was replaced by Ray Patterson. 1978 and 1979 saw the release of further singles, in particular Honey I'm Rich (written by Ray Parker) and Oh Honey , and the group's first album, The Promise Of Love. 1978 also saw the departure of Lon Coley who was replaced by Bruce Dunbar. Although further chart success in the UK eluded the group their fortunes were to change at the end of 1979 with the release of their first single in the USA, the haunting Oh Honey . This record went to #5 in the Billboard R&B chart and was also a hit in the Billboard pop chart, eventually notching up sales of 500 000 units. The album The Promise Of Love also sold in excess of 250 000 units in the USA.

The marriage between Delegation and producer Ken Gold continued when in 1979 the group signed to Gold's production company and through this association secured a recording contract with Ariola Records. Eau De Vie, the first album recorded under this new deal and released in 1980 is a success story in itself, still selling in respectable quantities throughout Europe 15 years after its initial release. The group released many singles from this album and their popularity around the globe increased with the release of each new record. Several of the songs featured on this album were hits for the group in many territories and became classics over the years with titles such as Darlin' (l Think About You), You And I, Heartache Number Nine and Put A Little Love On Me still receiving radio airplay ail over Europe.

1981 saw the release of the second Ariola album entitled simply Delegation and from this album two singles, In The Night and I Wantcha' Back became hits for the group. At this point in their career Delegation were performing at concerts all over the world and in addition to their live work in France, Germany, Scandinavia and other European territories, their success took them to continents such as Africa, Asia and South America. Their third Ariola album, Dueces High was released in 1982.

A change of personnel and record label took place in 1983-1984 when Bruce Dunbar quit the group to return to his native USA and Kathy Bryant (also from the USA) became the new member of Delegation. Ricky discovered Kathy in Germany where the group were performing and after hearing her voice immediately offered her a place in the band. Once again through Ken Gold's production company Delegation were signed to Epic Records through which a single It's Your Turn was released. This title, although not achieving the chart success of previous records, went on to, become a classic track for Delegation particularly in the territory of France where it is still played by top club DJ's.

Throughout the rest of the 1980's Delegation continued touring Europe and in 1986 re-recorded Where Is The Love in Frankfurt, Germany. The record was an immediate success in many European countries and has now become another classic for the group being featured on many current soul compilation albums. In 1989 further success was achieved when The Mix was released in France on the Scorpio label. The Mix was a segued compliation, re-recorded and repackaged, of five of the band's biggest hits and went on to become a hit in France and Germany.

With their continued commitment to live work Delegation survived through the early 1990's when soul music was eclipsed by the huge global success of rap music and it was through this music medium, ironically, that Delegation's name was also kept at the forefront of popularity with rap artists in the USA such as Coolio and The Ghetto Boys achieving massive success with the "sampling" of Delegation's original recording of Oh Honey.

Through a partnership between Ricky Balley and Ken Gold a record label, Euro-jam, was established in 1994 and from this label the definitive package of Delegation material - The Classic Collection - was released . Many of the titles featured on this album were available for the first time in CD format and sales in France and Germany were considerable. 1995 will also see the re-birth of Delegation with plans to record new material in the original Delegation style.

With their astonishing track record both in record sales and live work Delegation will soon celebrate twenty years of success in the record business and with the release of The Classic Collection and the collaboration with Mauro Farina - Fabio Turatti & Factory Team (label One-Way records) that have produced the new album Encore we can expect their new legion of fans to substain their success into the next century.

Encore has been recorded at Factory Sound Studios (Verona) Italy and released in April 1996 on One Way Records (S.A.I.F.A.M. Publishing Group). One of the new singles to be released was Wanna Be The Winner which is a real Eurodance song.

SAIFAM website
Thanks to reBeL and Leonardo Marmolejo Maldonado