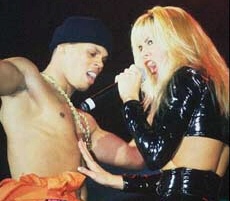 TH Express project was created by the French record company Ramdam Factory in collaboration with Mauro Farina from SAIFAM Publishing Group.The group featured Fauve as frontlady, while Ramses (the model and dancer Djanis Mitchell) did the raps. The two first singles, I'm On Your Side and Missing In The Rain were a hit on dance floors in Spain, Japan, Benelux, South America and especially in France, where the group did most of their shows, and where their video clips were recorded. Strangely, on the sleeve on one of the versions of I'm On Your Side, one can read "TH Express feat Moe". Actually there is a strong probabilty that Fauve has never sung for TH Express. Annerly Gordon was the voice on I'm On Your Side. As for the other songs on the album, rumors said that Melody Castellari sung on Love 4 Liberty. More recently, it was revealed that vocals actually belonged to singer Jackie Bodimead. Fauve only did the French spoken parts on the album track Crazy 4 Love. As for Djanis, he probably lipsynced too the raps performed by Daniel Sous.

In April 1996, the album Love 4 Liberty (an excellent album containing some amazing eurodance tracks, such as Luv Luv Luv or Coming Up which was covered by a project called Piccadilly) was released, together with their 3rd single (with the same name). Although their first singles were typically eurodance tracks, Love 4 Liberty sounded more housy, following the mainstream of European dancemusic (even if one of its remixes was an amazing Eurodance track). Daniel Sous is thought to have done the male raps on I Love To Dance, Missing In The Rain, Nite Away, Lonely Mind and Crazy 4 Love. Ragga-raps on I'm On Your Side and Love Hate Love could have been done by another rapper, still unknown so far...

In 1997, they released another single, called I'll Be Your Number One, their last real Eurodance song. On this track, which is not featured on the album, there was no rap.

May 1998 : after a year of wait, a new TH Express single was out in Italy. Called Tierra Del Sol, it should have been licensed in France through Ramdam Factory but finally it was never released in this country. It was a latino song close to Bahia (Todos Cantares). Then came in 1999 the remixes of I'm On Your Side RMX 2000 and Bahia RMX 2000. We had to wait another year to have another new original single released : Angel Of Love (under One-Way records).

2002 : the album Love 4 Liberty 2002 was released in Russia by the company Cool Hit Publishing Y2K. It contained the originals songs released between 1994 and 2000, as well as some remixes and a multimedia part with the clips of Love For Liberty, Missing In The Rain and I'll Be Your Number One.

2008 : tracks keep on being recorded and released under the name TH Express. They are usually available as digital releases only. In January, Whatever I Do Wherever I Go was released. It featured the current SAIFAM "standard singer" (known as Hazell). She comes from the United States...

2010 : Djanis tries to launch a carreer of underground rapper.