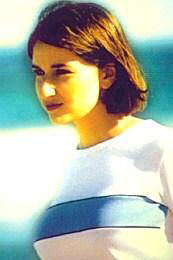 23/02/2011 : SAIFAM will release a new single in March under the project name Kate Project, entitled Lovesick

Kate Project is a group created by Mauro Farina and G. Crivellente, produced by SAIFAM Publishing Group. The majority of the songs released by Kate Project are covers of pop hits. Usually the recordings and mixing were done at Factory Sound Studios in Verona.

According to her official biography published by SAIFAM, Kate has always sung. She was working in a club as vocalist, singing over tracks and using her voice as an instrument "to keep things hot on the dancefloor". Lots of people came there, including various producers and some of them were favourably impressed by her ability to sing different styles. They therefore introduced her to Mauro Farina.

She was described as a brown-eyed girl who loved the sea, but also travelling and reading, and collection Coca Cola's gadgets. Her favourite sports was mountain-bike. Her favourite colour was black. She enjoyed eating pizza and drinking Coca Cola, and owned a dog. Her favourite music was dance-house. More likely, many vocalists took part to the project. Among them, there could be Jenny, whose voice can be also heard on Plastika Love And Heart and Masquerade's Square Room.

It started with the very nice eurodance track You Can, originally written by M. Kane, probably using the voice of Jenny. The B-side was entitled The Beat That Makes You Move, in 2 versions.

1995 : No More I Love You's was a cover of a song at first released by Annie Lennox. It was followed by Wuthering Heights, a cover of a Kate Bush song (named after Emily Brontë's famous book). This single was arranged and produced by Bresciani and Bragante. It included a B-side called Kate's. The follow-up Time After Time is a cover of Cindy Lauper's song. It was arranged and produced by the same team as before, plus Mauro Farina for FCF productions. There was a B-side included, entitled Groovin Mr Time.

The follow-up Ecstasy Of Light was, for once, an original song composed by M. Farina and G. Crivellente. It was produced by Produced by Farina, Crivellente and Fadinger, with the help of F. Serra and Johnny Mix. It also included a track called Ecstasy Of Flight.

In 1996 the single Heart And Soul was released. It was produced and composed by Farina-Crivellente with the collaboration of F. Turatti. It was mixed at Mela studios (Verona). The vinyl included 3 mixes.

If You Can Say Goodbye was out in 1998. It was written and composed by A. Bindella, F. Serra, M. Farina and G. Crivellente. It included the track You Can as B-side. It was followed by A Better World in 1999, which is maybe one of the most well-know Kate Project tracks, and the only one to be released as CD-maxi (including 5 version plus I Don't Wanna Believe). It was written by M. Farina, R. Turatti, G. Zandona and S. Melloni.

Baby You Can Help Me was released in 2000 under the label 21st Century Records. It was written and composed by M. Farina, G. Crivellente, Fabio Serra and S. Farina. It was produced by Mauro Farina and Factory Team, mixed at Factory Sound Studios in Verona, mastered by Compotech.

One Small Day was duo with Ken Laszlo. It also contained Bandido's track All Night Long (maybe a cover of a song by Ultravox) as B-side.

Thanks to Klems and Abelito
Kate Project biography on SAIFAM website