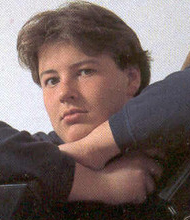 02/05/2004 : Serge Ramaekers (former composer for Cartouche and T-spoon) release a new single for his current project Orion Too entitled Call Me.

Born in Belgium on the 17th of April 1966, Serge Ramaekers started showing his interest in music when he was a little child. At the age of six he built an organ with daddy's help, but realized very soon that you could do a lot more with a synthesizer. With the help of generous grandparents and parents, who believed in the ambition of their grand-son, he could develop a real homestudio.

At the age of 16, Serge started a DJ carreer, first with a mobile show, then in big clubs like Highstreet, Carre, Reflex, etc. Progressively he reoriented towards composing, lyrics writing and producing. He produced the music for projects like T-Spoon (with Dominic Sas), Confetti's, Cartouche (not only a European hit but also gained a billboard notation (number 61) in America, 2 Boys and lots of others), Good Shape, Dixie's Gang, Dinky Toys, Jamie Lee, Soul Dance Project and Stay-C. In 1998 he launched the group Confetti's. This new-beat dance-act lasted 3 years and avery single became one of the best selling records in almost every European country.

In 1989 Serge started to remix other artists singles. The first client was the Belgian singer Rocco Granata, who asked Serge to "dress up the song Marina in a new outfit"... The new version was almost as succesful as the original hit ! In 1993 Serge did an excellent remix from Freddie Mercury's Living On My Own. The remix enjoyed success throughout Europe remaining at number 1 for several weeks across the charts. He also did remixes for Twenty 4 Seven, Technotronic, Eartha Kitt, Grandmaster Flash & Melle Mel, Wee Papa Girl Rappers, Lolo Ferrari, George Clinton, Rocco Granata and The Night People.

In 1999 he co-produced , with Phil Wilde, the project The Force feat. BB Queen (If I Could Turn Back Time, written by Diana Waren, released in 1999). In 2000 he released a single-CD under the name DJ Serge & Remy : Groove Me with 4 mixes in year 2000. Remy is none other than Remy de Groot, who contributed to T-Spoon's best older titles. More recently in 2002 he took part to the single Dreamer, under the name CK & Supreme Dream Team (Edel records), together with Martinez and Van Wauwe.

Serge Ramaekers is currently working with Patrick Bruyndonck on his very succesful project Orion Too (You And Me, Hope and Wait), featuring the voice of Caitlin (former singer for Astroline).

Dancemania Belgium
Dancevibes Belgium
Thanks to nolimits and Nico