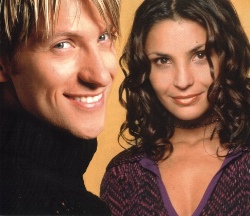 Behind XSession stands the producer Marc Cortens. This Belgian project features Parik, quickly replaced by Gene Thomas (who started his carreer as lead-singer for the Belgian band Ship of Dreams and also did backing vocals for Chelsy) and the vocalist Cassia, replaced in 1997 by Gina Brondeel.

The first single Give Me The Power featured Cassia and Parik ans was released under L&T records. It was composed and written by Marc Cortens, Robert Garlick and Wim Claes

But their first real hit was Bang Bang back in 1996, it remained in the Belgian hit-parade during 27 weeks ! The following single featured the voice of Gina and was entitled Say Yeah. Then came hits like Pump It, The Sound and the ballad Baby, It's You. These hits were on the debut album A Trip To Xanigy.

Later in 1999 they scored a huge it with their single On And On. A third member named Serge appeared on stage with them. Then they released their second album By Me, followed by the single Welcome To My World. Afterwards in 2000 they got signed by a new records company and released the track Boogieman from the forthcoming third album. They started the new millenium with Destiny whose video clip was shot in Egypt. The third album, entitled Back To Basics, contained 12 tracks plus a CD-ROM part. Meanwhile Gene and Gina started working for TV : Gene is presenting the TV show "Gene Machine" and Gina is playing in the TV-soap "Thuis".

2007 : Gene is now a famous solo singer in Belgium and is married to Kristel from K3, a hugely popular girls band for children. Gina in the meanwhile has left the soap "Thuis" on the Belgian public broadcaster VRT. She now enjoys her family life with her children and husband, and has no immediate plan on staple.

2009 : they did a comeback appearance in Hasselt.

2010 : they appeared as surprise guests on stage of I Love The 90s in Hasselt, in front of 22.000 persons. In June, Gene announced that a new Xsession single could be released soon.

Listen to XSession on Radio Euro Classic, the eurodance radio