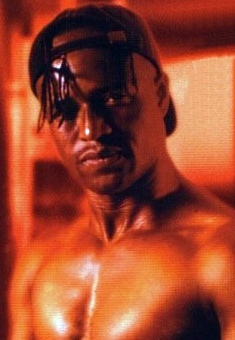 03/06/2012 : Technotronic with Paul Almeida released a new version of their 1999 single Like This, from the new Technotronic best of album. (Thanks to Dance Music News)

14/03/2010 : Mphasis did a remix of Bingo Players's Disco Electrique, combining it with Technotronic raps and a true eurodance song. His remix of Ice MC My Word is really worth listening too.

06/09/2009 : Rumours state that Technotronic could be working on a new album, to be released on September 9th of this year on Universal Records. It would be featuring Ya Kid K. and Eric "MC Eric" Martin. This year, they had started a successful World Tour to celebrate the 20th anniversary of Technotronic, performing full-length concerts featuring some new remixes of the well-known hit singles and introduce some new tunes. All tourdates are on their Myspace. (Charly "Forti" Romanowski and eurodance blog)

The beat and the look that conquered virtually every hit-list throughout the world, and shook the international dance community to its foundations. Technotronic was the restless offspring of innovative Belgian producer Jo Bogaert. He expertly devised the now all too familiar sound of Technotronic in his small attic studio about 20 miles North West of Brussels.

In 1983-84, Jo was the keyboardplayer for the band WhiteLight (intimistic, sober Velvet-Underground-ish songs). After the demise of this, he turned into a solo-"do-it-yourselfer" in his attic in Aalst. At the time of the eruption of New Beat, he operated under a number of pseudonyms (Nux Nemo, Acts of Madmen ...).

Pump Up The Jam took radios and night-clubs by storms and in no time Technotronic topped the worlds charts.

The first public face of Technotronic was a blue lipped renowned fashion-model known as Felly Kilingi. It wasn't until the second hit single Get up that the public discovered Manuela Kamosi, or Ya Kid K, for the first time. She had already performed the original vocal on Pump Up The Jam and now finally the world could bear witness to her struttning amblent deliverance of Get Up. After the monumental success of Pump up the Jam the path was now clear and Get up achieved all expectation. Technotronic's debute had netted over 3,5 million in world sales, the follow up grossed another 1,9 million definite proof that Technotronic were not 'one of wonders'. Their sound was and still is a force to be reckoned with. The stage was not firmly set for their first album release Pump up the Jam. Pretty soon the album had notched up over 4 million world sales. By the end of 1990 Pump Up The Jam had reached pole position in the Billboard 12 singles dance chart.

The follow-up singles Get Up (Before The Night Is Over) and This Beat Is Technotronic (feat. MC Eric) were also very succesful.

The last significant chart success was in 1992 when Move That Body (featuring Reggie) peaked at No.5 in the U.S. Billboard charts.Up until now Technotronic have retailed more than 13 million albums.

The same year, they released another title featuring Reggie : Money Makes The World Go Round

1994 : Technotronic was back in eurodance style. Producers Jo Bogaert (Thomas De Quincey) and Patrick De Meyer teamed up with producers Phil Wilde and Peter Bauwens, world famous for their huge success with CB Milton and 2 Unlimited. The result of this combination was Move It To The Rhythm (featuring Ya Kid K, Daisy Dee and Black Diamond ) followed by Recall and a new album with the same name. Then everything became very quiet around the project...

1997 : Technotronic released a remix single called Get Up'97, followed by many other re-releases.

1998 : DONS released Pump Up The Jam under the name of DONS feat.Technotronic. The radio edit (track N1) on this single was made by The Loop! (no other than Scooter).

2000 : Technotronic were back with some new material : after Like This featuring Monday Midnite, they released The G-train with the same artist. Then followed The Mariachi in June, with an appearance of Ya Kid K.

2001 : Technotronic released a new single in May called Runaway Blues.

2005 : DONS released a re-remix of their version of Pump Up The Jam. It entered many charts across Europe.

2007 : Global Deejays feat. Technotronic "Get Up" peaked #4 on the danish dancechart.

2009 : Technotronic announced that they working on a new album. It would be featuring Ya Kid K. and Eric "MC Eric" Martin. But nothing finally came out. They had started a successful World Tour to celebrate the 20th anniversary of Technotronic, performing full-length concerts featuring some new remixes of the well-known hit singles and introduce some new tunes

2012 : Technotronic released a new best Of album, as well as a new version of their 1999 single Like This with Paul Almeida

2014 : Bodybangers released a cover of Technotronic's hit Pump Up The Jam

© Remixed records
Thanks to Tom, Anders Bøgh and DJ Alex Calboy for the latest informations

Listen to Technotronic on Radio Euro Classic, the eurodance radio