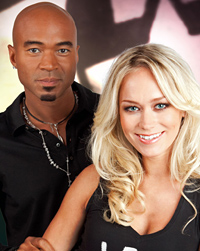 12/10/2020 : Ruud Van Rijen revealed that a new single for Twenty 4 Seven was currently in progress

12/11/2019 : Nance will join Twenty 4 Seven again, but this does not mean that Li-ann will leave the project. She will keep performing with Stay-C, while Nance will perform with the dancers team from the early 90s.

11/01/2016 : On January 18th only, you'll be able to get Twenty 4 Seven very first album Streetmoves for free. Free download link will be available on producer Ruud van Rijen's website (Thanks to Krasi).

In the year 1989 the Dutch producer and remixer Ruud Van Rijen created Twenty 4 Seven. This became something totally new : a female singer, singing a catchy chorus together with a male rapper. This combination together with a very happy sound, a melody you can't get rid off, became very popular in the Netherlands and beyond.

In the beginning he started out with rapper MC Fixx it. The single was called I Can't Stand It. This was a hip-hop track (100 BPM). The chorus was made by Ruud himself with a vocoder. But the track only was a little hit in the Dutch Tip-Parade. So Ruud started working out a Hip-House version (124 BPM) which was totally different from the original. Nance Coolen was chosen to be sing the chorus. As it was the trend at the time, song also sampled many singles, such as The Jacksons - Can You Feel It and Kurtis Blow - AJ Scratch. This time, I Can't Stand It hit top 20 in Holland.

After a few months, a German records company showed interest in the record. They asked Ruud to re-record it in Germany with a different rapper. I Can't Stand It third version featured raps by Captain Hollywood, along with Nance's vocals. They were joined by 2 dancers Jacks and Hanks who also did the male backing vocals. It became a smash hit all over Europe, charting in September 1990, peaking #7 in the UK, and #3 in Israel, and #1 in many other countries.

After I Can't Stand It Twenty 4 Seven released Are You Dreamin' around Christmas 1989. It was a good follow-up in view of the chart positions it gained. And in 1990 they released the album Street Moves.

At the end of 1991, Captain Hollywood had a little argue with Ruud van Rijen and left the band. After this, he created the Captain Hollywood Project. During this time, Captain Hollywood became even more popular than Twenty 4 Seven :his hits like More & More, Only With You topped charts in whole Europe. Twenty 4 Seven seemed to be fallen asleep. Things were that quiet that Nance decided to take a job at a local supermarket. Can you imagine shopping in a store while Nance is sitting behind the counter ? But Ruud van Reijen wasnt planning to stop. He asked Nance to join the group again, and asked is she knew a rapper who could replace Captain Hollywood. Nance knew Stay C Paton from some concerts, were they both performed. The first song they recorded together was It Could Have Been You. But this song didn't have the impact as they hoped it would have...

During these years Eurodance became really popular. And suddenly in the late summer of 1993, there was a very 'aanstekelijk' (catchy) song a the radio. It was Slave To The Music. The song started slowly in the charts, but kept on climbing. And many weeks after it entrance it highest position in the charts. But the song didn't stop at the borders of its homeland, it grew and grew. Where most of the Eurodance stayed in west Europe and Japan, Twenty 4 Seven became popular in West Europe, Israel (where it reached position #17 in the national chart), Japan, Australia, South Africa, South America and even East Europe. Twenty 4 Seven was the first dance-act in ex Czechoslovakia who got platinum. They had become a worldwide top-act.

Stay-C & Nance toured all across Europe and could perform night & day if they would. At this time, Twenty 4 Seven could be considered as one of the most successful dance-act in the world. Then came the single Leave Them Alone, released with a Greatest Hits Megamix and a '94 version of I Can't Stand It.

The third album, I Wanna Show You, was released in December, 1994, at times when the first single from this album, Oh Baby, made it high in the charts in a big part of Europe. The second single Keep On Trying saw its release in March, 1995. The same year in which Twenty 4 Seven proudly received the Dutch Export Award of 1994. In spring 1996 they received a Golden Award for the album I Wanna Show You (South Africa) and double Platinum for the album Slave To The Music (also in South Africa).

While Stay-C & Nance still got a contract till July 1996, no new Twenty 4 Seven material was released. Nance & Stay-C stopped with Twenty 4 Seven and made both a solo single. In an interview on TV Nance told Twenty 4 Seven had split up, she and Stay-C couldn't bear each other anymore. According to their contract they should make a new album. But the only people who worked on Twenty 4 Seven were lawyers to get rid off this album... Twenty 4 Seven was about becoming a closed chapter of Dutch pop music...

But in July 1996 Twenty 4 Seven was back ! Since Nance continued her solo-carrier, Stay-C together with Ruud van Reijen looked for a new female singer and found Stella. She had already a solid musical experience, she had been on tour with artists like Haddaway.

Summer 1996 : the news that Nance & Twenty 4 Seven were performing again was partially true. Nance presented 'Beachpop 1996' in Renesse, a concert where many artists performed, among them Twenty 4 Seven. They also performed in many discos and did many shows on the 'Veronica Zomertruck', a large, riding scene. In September 1996 both songs, Nance's Big Brother Is Watching You and the Twenty 4 Seven's We Are The World, were very popular in Holland.

January 1997 Twenty 4 Seven released a new song called If You Want My Love. The release of this track was delayed a couple of times because We Are The World suddenly did very well in many countries. In April 1997 the recordings of the new album were completed.

September 1997 A single called Friday Night was released. It contained remixes by Paradisio, Lipstick, Ruud Van Rijen himself and some other acts, followed by the new album called 24 Hours, 7 Days A Week. In October/November 1997 Stella left Twenty 4 Seven. She was just too busy with her dancing and modelling career and she couldn't combine it with Twenty 4 Seven.

January 23rd 1998, the new single of Twenty 4 Seven was released in the program 'Toute Fabienne' at TMF, a dutch TV-station. It was entitled If You Want My Love.

Together with other artists, Twenty 4 Seven took part to the yearly Veronica Austria winter tour, doing their act on the mobile stage of the Veronica truck. They also got free time to go skiing themselves, that's how Stay-C broke his ankle. But 5 weeks later he was on stage again. And soon after Twenty 4 Seven performed on the Radio538 Dance Smash party. And Stay-C was dancing like he hadn't broke this leg.

September 1999 : after 2 years of silence, they released their new single. Entitled Ne Ne, it featured Stay-C and was a real eurodance track. It was using the same sample taken from N.U.K.E.'s song Nana, already used by LA Style in their single I'm Raving and by Caater in their single Oh Si Ne Ne.

2000 : rumors said Nance had been asked to come back, in order to take part to the vocals of a forthcoming single, nothing less than I Can't Stand It 2000. But these rumors were wrong. A Best Of album was also planned for the next future but nothing was ever released.

2006 : Twenty 4 Seven appeared during a 90s dance party organized in Italy. But the performers on stage were not the real ones.

2007 : the new Twenty 4 Seven single was ready. Entitled Like Flames, it featured a new vocalist called Elle and covered a song first released 1987 by the band Berlin. A video was shot in Rotterdam during October, in which Ellen showed her talent as well as her beauty. The hectic life of showbusiness drove her back to her former job, away from the spotlights.

2010 : after 3 years of silence, Twenty 4 Seven is now a duet featuring 2 new female vocalists : Li-Ann and Miss Cherry. Li-Ann previoulsy release 2 solo singles entitled Friday and Pop The Cherry. They were about to release a new version of their hit Slave To The Music.

In September, Stay-C officially joined Twenty 4 Seven again while Miss Cherry left the project to focus on her carreer under her real name Sharon Doorson. Slave To The Music 2010 was re-recorded again.

Ruud and Stay-C declared that they were working on the follow-up single, which was planned for early 2011, and a brand new album that would follow shortly after. Stay-C and Li-Ann would be working 24/7 all around the world again. They started off in October in Latin America, where they had some very successful concerts, proving the everlasting popularity of Twenty 4 Seven.

2018 : Twenty 4 Seven featured in a TV commercial for Jeep Cars, GoPro and Hard Rock Hotel. Stay-C and Li-Ann are now officially a couple.