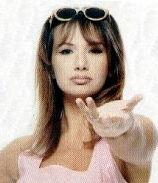 04/01/2010 : Taleesa was featured by the DJs duo Muthagroove on a cover of the classic My Body And Soul

08/04/2009 : On November 14th 2009, Berlin will host a big Italo Party in Berlin. With names such as Taleesa, Playahitty, the Soundlovers, Len Laszlo, Roby Pinna, and many more... All infos here (thanks to eurodance blog)

03/05/2007 : Taleesa has a new song which was created in collaboration with a Swedish team. She is currently in studio recodrding the vocals. Release should be this summer or more likely in September. Taleesa could also be thinking of stopping her singer carreer for producing (thanks to Tavi Meran).

27/10/2003 : Taleesa recorded a new single with De La Cruz, it is entitled In My Mind and it will be released this week (thanks to Sergio).

Emanuella Gubinelli aka Taleesa was born on the 19th November 1971 in Santa Monica, California (or Matelica, Italy according to some toher sources). Her parents had Italian origins and she received a very strict education. She studied in a religious college and learned how to sing, play piano and violin. She started singing in a local band at the tender age of 9. Then, as she was still an adolescent, she escaped from home to follow her rock band for a tour in Europe.

After this tour, the young Taleesa signed a contract with WEA, but it proved not to be exactly what she wanted. So after 2 years she broke the contract and moved to Milan, Italy, to give a new direction to her carrer. She started working in studio as composer and arranger.

She started gaining credibility as author when the 2 songs (Say Yeah and Keep On Jammin) she had written for Stefano Secchi became hits. This allowed her to restart her singer carreer and to record songs such as One Love the Lifetime, Living 2 Love and Baby Don't Stop that had some success in France and a few other European countries. She also released a single under her real name Emmanuella, entitled Satisfied, in collaboration with B. Sanchioni.

It is less known that she also contributed to many eurobeat projects which had success mainly mainly in Japan : Linda Ross, Morena, Jilly, Ann Sinclaire, Vanessa, Gisele, Paula Marsh, Serena, Maggie Sue, and many more...

But success came as she was a vocalist featured by the duo Cozzi and Rossi (Co.Ro) on the version they had made to Because The Night (a cover of Patty Smith and Bruce Springsteen). Her impressive voice appeared also on There's Something Going On/I Break Down And Cry, and on the following album that Co.Ro released in 1993. After her singles with Co.Ro became a hit in America, Emanuella decided to go solo again.

Then, under the pseudonym of Aladino she released 3 eurodance singles : Make It Right Now, Brothers In Space and Call My Name, all of them being very successful in Europe. In 1993 she also collaborated with G. Spagna on Dave Hammond's single All My World.

One of her first singles under her name was I Found Luv, written by G. Amir Saraf and Uli Brenner, produced by Giacomo Maiolini featuring raps of Michael Romeo. After that, she returned to Italy and released many other songs, like Burning Up (that she co-wrote and co-composed with Trivellato and Sachetto), Falling In Love (produced by Visnadi under Flying Records, re-released by ZYX), Let Me Be (that she co-wrote and co-composed with W. Cremonini, A. Gilardi, produced by Giacomo Maiolini and released under Time Records) and a country dance called Jambalaya, cover of an old rock song.The following release was called I Wanna Give. It was not really dance music, so it was not very succesful, even if the song was good. She started touring all over the world, she enven presented some TV shows in Brazil where she also gave live gigs in discos.

In 1996, Taleesa started a new collaboration with G. Spagna : her name appears on Paul Rogers' Wanna Be My Lover and Morena's Music Take My Breathe Away.

Internet Love : differently from her last 2 releases, this song is very energetic, every Internet user will like the lyrics. Once again it was a collaboration with the duo Saraf-Brenner.

With You And Me Taleesa really moved to a more housy trend. The music, the style and the way she sings sounds like Gala, and even being a good dance song, it is very different from what we're used to.

With Kisses, Kisses, Bye-Bye Taleesa gave us a nice, fast Italo song which, for some, reminded Simone Jay's Wanna Be Like A Man. It had some success locally in Italy. Then she came back to her native California.

Her last single to be released under the name of Taleesa was called Beach Boy, a kind of pop song.

Nowadays she lives in Milan. She also owns a house in California. She loves to travel. She says she believes in God. She likes Madonna for whom she has a lot of admiration.

1998 : she co-wrote Simone Jay's single Luv Thang. Rumors say that she could have released an album entitled Singles Collection but it can't be found anywhere.

1999 : she released a single under the name of Axia entitled Love In December and another one under the name of Moonlight entitled Love Control (produced by Turatti/Melloni). She also recorded in her own studio a complete album called Whatever Happened Lately?, aka Que Pasa Ultimamente?. It contained 12 songs in Spanish and English with a combination of ballads and rock. Taleesa, accompanied by a music group and dancers, toured for over a year many countries in South America. She described the tour like the best experience of her life.

2002 : she kept on collaborating with De La Cruz for their new single, the very nice There's No Right.

2003 : Taleesa released a new single under her name, the song was entiled Over You, and the music was Kylie Minogue style. The single was published by Vale Music Spain, written by Michael Corkran (her boyfriend), Emanuela Gubinelli herself, and V. Gaffurini. It was produced in her own studios Luv-en-colors.

Later the same yer, she recorded with Aron Michael a single for DJ Stefy entitled The Promise You Made. She already started working on a new single...

In October, she recorded a new single for De La Cruz In My Mind. The new single was released under Elite Records, the new label that DJ Richard & Johnny Bass (the brothers who stand behind De La Cruz) created after leaving Vale Music.

2005 : Taleesa recorded a new song for De La Cruz called Where U Belong. It entered the American chart at #35.

2007 : Taleesa recorded a melodical pop song entiled Children Alone, written by her husband Michael Corkran and Roberto Baeli. All the rights of the song will be destinated to Action Aid... Nowdays she is mainly working as a producer for other artists with big level in Italy. She is also doing remixes in studios in New York City and in her own studios based in Los Angeles..

2009 : Taleesa was featured by the DJs duo Muthagroove on a cover of the classic My Body And Soul. In November, during her appearance on the stage of Italo party 2009, Taleesa announced that a new single was on its way.

Eurodancemix
Thanks to Selena Valeria Giannobi, Alberto, Sergio, Tominho and Andrew-FK
Thanks to Edgar JR for the pics
Thanks to 90s Dance Music Website

Listen to Taleesa on Radio Euro Classic, the eurodance radio