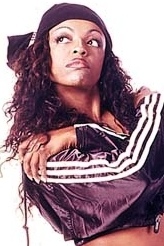 09/05/2015 : Sandra Chambers could be the voice featured on Soundsun U Can, released last February under D:Vision Records.

30/04/2011 : Sandra Chambers posted pics of a recording session she did this month. (Thanks to Eurodance Blog)

18/01/2011 : Recently, Italian label d:vision released a new version of Benassi Bros feat. Sandra Chambers's hit Illusion. The new version was made in collaboration with DAB. (Thanks to Tavi Meran)

19/10/2010 : Sandra Chambers was interviewed on Italian Radio Zerosei. She opened a canto school in Brescia. Meanwhile, she is working on her first solo album, "and I will continue to do what I love the most doing : dance music", she explained. (Thanks to Tavi Meran)

27/07/2010 : A small part of Sandra Chambers featurings carreer was summarized in this very well-made megamix of 11 min (Thanks to Tavi Meran)

Sandra Chambers was born in Birmingham (UK) on11th of April 1967. Her musical career began at an early age, when she and her brothers took part in talent contests all over the country, singing songs by the Jackson Five, Doobie Brothers, Three Degrees... She moved to Pisa, Italy in April 1992 to improve her Italian, during the last year of a degree course in Italian studies at the University of Lancaster, and sung in bars during her free time. After having successfully completed this degree, she stayed in Italy and kept her bars singer carreer. That's how producer Robyx spotted her and asked her to come to DWA studios because he needed a background vocalist. She read "Savage" on the business card he gave her and she wondered what kind of name is it... The first recording was We All Need Love by Double You. At that time, she did not even know what musical team she was working with...

This collaboration with the DWA Recording Company really launched her carreer on a professional level. She worked on Double You's first two albums We All Need Love (1992) and The Blue Album (1993). The project gave rise to two singles: Rock Your Baby (1992) and Gimme Some (1992), she also appears on the track I Gave You All.

She later went on to join the dance project Netzwerk, which found success with Send Me An Angel or Breakdown. She also sung as Jhava (Don't Tell Me Lies), Infinity featuring Sense (Baby Stay duet with William Naraine), Babyroots (Gimme Some, Rock Your Baby, Rock Me Baby), Tuttifrutti (Superboy duet with Alexia). She collaborated to the Corona project as studio vocalist (except for the first hit The Rhythm Of The Night) and that she also contributed to JK (her voice can be heard on My Radio). During 1993 and 1994 her musical experience widened with her embarkment into the field of jazz and also into the field of jingles - backing vocals for television and radio. After many other collaborations and recording sessions in and around Milan, in May 1995 she had the opportunity of working once again alongside Double You, on the chart-topping track Dancing With An Angel.

Her solo career started in 1994, when she recorded a single under her own name for Lupomannaro label : Everybody's Dancing. Then came Bad Boy under the name of Sandy, released in 1995 under DWA. The song reached the top 20 in Italy and was also released in many other countries. It was even covered by a project named Underground Hammer Man !

Her passion for singing and music in general is due to having been raised listening to Aretha Franklin, Marvin Gaye, Luther Vandross, Freddie Jackson... Her favourite contemporary singers are : Lisa Stanfield, Patty Labelle, Take 6... Her other passions, apart from music, are languages and dialects. She loves the arts in general and she is a very avid reader, especially for topics concerning psychology. She is not keen on any sport in particular and she describes herself as a very lazy person, who sleeps at least ten hours a night ! With regard to fashion, she tends to lean towards the "Hip hop american street wear" trend and she is also very keen on sportswear (adidas and nike), although not on sport...

In 1998, she did backing vocals for Alexia's song Bad Boy. Then she had a baby and stopped her collaboration with the Corona project. However, the new millennium resurrected her interest to dance music...

Sandra launched a new career in jazz music, and did commercials for TV and radio (she recorded I Can See Clearly Now for AXA in 2002, You Don't Have To Say You Love Me for Cornetto Algida, and did a duet with F.Arnò for the song Someday, for the Chrysler PT Cruiser in 2004). Sandra started working for Roby Benvenuto's company, recording many dance tracks for other markets than Italy. Then she signed a contract with X-energy records.

2003 : Sandra contributed as vocalist to KMC's single Get Better.

2005 : Sandy Chambers, took part to a 13-tracks album entitled Boney M remix 2005, along with Bobby Farrell the original leader of the project.

2008 : Sandy Chambers recorded a duet with Dhany produced by the Benassi Bros, called Break The Wall.

2010 : In May, she recorded a song entitled Born to be free for the project La Maison Derriere. In June, she was featured on Mood Velvet's single Summer Of My Life and on Pro-Hunters's single Catch Me Now. Her next solo was entitled Cloud 9.

2011 : in April, Sandra Chambers posted pics of a recording session she did that month. But nothing came out do far...

2017 : since many years, she's been running a school in Brescia Vocal Project Comboni (formerly known as Accademia Franciscanum).

A top Italian producer once said to her "Sandy, you have a lucky voice. Everything you sing turns to gold!"