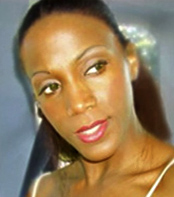 Music has always Barbara's passion. Born in the New Jersey (USA), she moved with her family to Florida and started singing gospel and classical. She came to Europe where she started a modelling carreer, then she went back to her first love : music.

She appeared in a few soaps, such as Miami Vice and As the World Turns. She took part to San Remo festival in 1997 and 1998, and collaborated with various Italian artists such as Paolo Conte, Elisa, Zucchero, Andrea Mingardi, but also international artists such as Mariah Carey and the Blues Brothers. She also recorded jingles for the Fiat Stilo and Citroen.

Teaching herself to play piano and guitar is a real challenge but she has already composed fifteen songs that are now being arranged. She did a cover of Barry White & Love Unlimited's 70's hit I'm So Glad That I'm A Woman and is completing her summer tour promoting the track.

She is described as "solar and gifted with a definite and limpid voice". Her live performances are exuberant and energetic. She always manages to capture and involve her audience, which is typical of someone who is determined and positive.

2001 : Barbara released a solo single entiteld Go To The Top.

2005 : she co-wrote with F. Contadini and recorded the single Saved By The Music under the name House Groovers feat. J&B.

She had also written 2 pop ballads this year. Her first release will be a song called I Can Wait that she had originally written for her 13 year old niece Tiffany Evans who signed with Columbia earlier this year. The track was not accepted by the record company for this young star so Barbara decided to record it herself. It was produced by singer/songwriter/producer Jarvis Evans.

In November Barbara appeared at The "PIPER's Pics" TV. This time she was as nervous as ever singing her very own song I Can Wait in front of a live audience for the very first time. She was called back for the November 26th episode.

2006 : Barbara is performing as a lead vocalist with City Lights, one of the most successful South Florida bands. She's co-producing Eniam, a promising rapper from Miami. She is also collaborating with rapper and producer Traffic from Nashville. Their first RnB ballad has been recorded. She plans to establish her very own record label soon. She also gave her voice for a beer commercial on National TV stations in Italy.