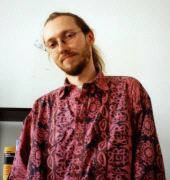 Hubert Nitsch was born in Darmstadt on September 5th 1967. After classical piano lessons at the age of an elementary school student a temporary change took place : the key instruments were replaced by the bass. In the 5th grade he established a hard-rock band with some fellow students. At first well-known songs were re-enacted but soon some of his first composions followed.

1984 was the beginning of a short but intens jazz phase. Together with a friend he visited the international music summer camp Blue Lake Fine Arts Camp in Michigan, USA. where intensiv jazz courses were given. His interest in key instruments was re-established by the rising of affordable synthesizers. From this point on he worked as a keyboarder on stage and in studios. In 1987 he passed his finals in school.

In1988 his band won 1st prize in a rock contest for the Darmstaedter Sparkasse. After this, the band seperated. Hubert became a part of the bands Spice and L.A. News from Frankfurt. In 1990 he began to study computer science study and simultaneously and he became a studio musician and arranger for various bands and producers. In 1991 he decided to stop his live acts. Meanwhile, he worked more often with Nosie Katzmann. Finally, in1992 he signed an author contract with Get Into Magic. In 1995 Hubert moved his studio into the Get Into Magic hit-device studio complex and since then constantly builds on to it.

The list of projects he has participated in during the last years, be it as an engineer, studio musician, producer or composer includes : Culture Beat, Wenndann, Rafet Elroman, Nina, Mike Dielh, Ice MC, Affinity 3, O-Dance (On The Beat), Haddaway, Solid HarmoniE, Le Click, Judy Weiss, GIL und Bastiaan Ragas (Ex-Caught In The Act).

Lately his work consists of two increasingly successful components: on the one side the composition work together with Nosie Katzmann and Kim Sanders ; on the other side his work as an engineer and arranger in his own studio, which because of the quality of the results and the speed of the work is constantly becoming stronger in demand. The mixes do not need to avoid the comparison with internation top-productions.