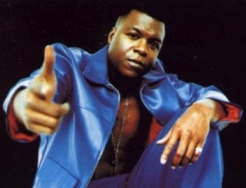 BG the Prince of Rap   (Germany)

04/12/2020 : Dian Solo from Bulgaria act Deep Zone Project did a great remake to BG the Prince of Rap's classic This Beat Is Hot (Thanks to Krasi)

26/11/2020 : BG the Prince of Rap's next single will be out in January. Entitled Sugar, it will be a collaboration with Chrizz Morisson and Timi Kullai. His 3 first albums were re-released digitally. (Thanks to Krasi)

09/11/2020 : BG the Prince of Rap's next single will be named Pretty Black Boy. It will feature Timi Kullai and Nathan Reynolds III, and will be out 20th November. A remixes packages for Only You will be released the following week.

22/01/2020 : BG the Prince of Rap recorded 2 new songs with new eurodance diva Timi Kullai as well as Nathan Reynolds lll and Enis Holla : Shine and Only You. He also did a collaboration with former Reel 2 Real rapper Mark Quashie

24/11/2019 : On November 28th, BG the Prince of Rap will release a new album entitled Never Stop (The New Hits) which will include 8 new songs and 2 megamixes (Thanks to Krasi)

BG the Prince of Rap albums

BG the Prince of Rap singles

BG the Prince of Rap remixes

BG the Prince of Rap biography

B.G. The Prince Of Rap (real name : Bernard Greene) belongs to those artists, who, since the beginning of the 90s, has been contributing to the German dance-scene development. His albums The Power Of Rhythm (1991) and The Time Is Now (1994) have brought him the success he deserved.

Bernard was born in Washington DC on September 28th 1965. After studying at Suitland High School and Prince George's Community College, then moving to South Carolina, he came to Germany in 1985 with the U.S. Army.

After he left the Army, he began to live of his talents of singer and dancer which he had discovered during his scholarship. "Everything began in a Gospelchoir at school", he tells. "My first musical experience was in a Rhythm & Blues style, which still remains my favourite music style".

Without any difficulty he made his place on the Frankfurter scene, awarding first places in many rap contests. He was soon contacted by the producers who would launch his international carreer. Among these internationally recognized people was Jam El Mar who had already made some remixes for Dr. Alban, Enigma, Frankie Goes to of Hollywood or Quincy Jones, and Stefan Benz, who co-wrote the lyrics of B.G.' s songs. With this team B.G. could really deserve his surname 'The Prince OF Rap'.

Among all his releases, let's mention the huge Eurodance hits Can We Get Enough (# 19 in Israel), The Colour Of My Dreams (# 10 in Israel and a big hit there even nowadays in the clubs) or Can't Love You.

For BG the public shows are as significant as the presence on the radio and in the charts. "Live appearances", he says, "are particularly important to me. There I can really emphasize fully my qualities of rapper. In studio I can only show a part of what I can do". His shows allowed BG to make his public discover his new creations, like Stomp. Released in 1996, this track contained some fast rap inserts, carried by very housy beats, in the style of Outhere Brothers or 740 Boyz. "It's a cover of a song by Brother Johnston, a song I always enjoyed. The idea of transposing it in the 90s made me enthousiastic". This single announced a new album, with "more raps, and more soul in the accommodations".

The same year, BG contributed as songwriter and as co-producer to Mr Partyman's single Hey Mr Partyman. Single was recorded at The Edge Of Reality Studios and released under ZYX Music.

1997 : Bernard contributed to 2 euro-rap songs (this style was very fashionable at this time) : Da Clique - Player (as composer, songwriter and producer, with the usual team Michael Rödiger and Marko Kranjcevic) and Green - I'll Pray, as a songwriter (with Chris Schwaab, Heinz Felber, Stefan Benz and T. Greene).

2005 : the German project Jet Set covered BG's hit Colour Of My Dreams. As for BG, he is now working at a museum near Wiesbaden in Germany where he moved in September 2005.

2009 : in August, for the first time since many years, BG the Prince of Rap and Janet Taylor performed in a club in Mainz (Germany). In November, both were featured by Michael Thomas on the single We Stood In Flames.

2010 : BG will collaborate with BPM on a brand new track that should be recorded in January 2011.

2015 : in September, during The Real 90s show in Mayence (Germany), BG performed a brand new song, No Limit

2016 : BG teamed with another Eurodance legend, Lane Mc Cray from La Bouche, to record single I Can Feel It.

2017 : BG's new single was entitled Never Give Up and it featured vocals by Hungarian singer Timi Kullai.

2018 : BG's new single was called So Special, again a collaboration with Chrizz Morisson and Timi Kullai. Pamela O'Neal also joined the team. The Colour Of My Dreams was covered by project Noe. Then came You'll Be Mine in May. Next single was entitled Once You Have Me. It featured once again Timi Kullai on vocals, as well as BG's cousin Nathan Reynolds III.

2020 was a very productive year for BG, seing him releasing 4 new singles ( Shine, Only You, Now Bounce and Pretty Black Boy) as well as a remix package for Only You.

BG's son Maxwell is also a rapper known as Maxomatic.


Links to BG the Prince of Rap

Complete your BG the Prince of Rap collection

More about BG the Prince of Rap

Listen to BG the Prince of Rap on Radio Euro Classic, the eurodance radio

BG the Prince of Rap on PromoClub - Nouveautés Dance