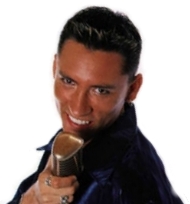 25/06/2018 : Captain GQ was featured by No Mercy member Marty Cintron on his single You Belong To The City

07/05/2017 : Captain GQ is back with a new single entitled Pleasure, featuring Michelle White.

This Canadian project is built around the Polish born Captain GQ. As a young boy, Mark Burzych (real name of Captain GQ) was greatly influenced by his father, a noted drummer in his own right, and by the many musicians that he was introduced to. In his mid-teens, Mark began DJ-ing in clubs and at events in the Toronto area. His goal has remained the same throughout his career : "to create my own music with my own style".

In 1995, Mark started collaborating with his first producer. Together, they recorded his first album entitled Here I Come. Three amazing eurodance singles were released from this album under the Numuzik label. Rockin' Through The Night (with vocals by Karine Leblanc), Here I Come and Come On And Dance were very successful on the overseas charts.

The 1996 tour in support of the album Here I Come, found Mark touring and perfoming with great euro artists such as Dr Alban, Le Click, Real Mc.Coy, JK, C&C Music Factory, Black Box, and La Bouche, performing in New York, Chicago, New Jersey and Detroit. Mark recalls it as a great experience : "to be performing with these artists was an inspiration to me". In 1996 too, Mark received a Certificate of Nomination from the First Annual Cyberspace Euro-Energy Awards as voted by dance music fans and DJs from around the world and carried out entirely over the Internet.

Shortly thereafter, Mark started working on his second album entitled Take A Chance, which he wrote and produced on his own. This album was released in 1999. The first single released from Take A Chance was Spring Love, which also topped many dance charts.

Mark's style has attracted a steady stream of budding and established recording artists, seeking him out for his studio savvy and musical smarts. Ultimately, Mark opened his own recording studio, Clear Sound Productions Studio. When not on one of his busy tour schedules, Mark can be found there, recording and producing various dance artists and developing new material for his own repertoire.

2002 : Captain G.Q. was working on his third album called Feel So Good.