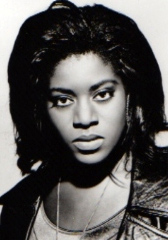 Ann-Marie Smith is from London; her parents originate from Jamaica. Nearly all Ann-Marie's relatives have music as their hobby, which they have inherited from their father, who sang in a local island band, before leaving Jamaica for Brittain. As a child Ann-Marie loved to do creative things as singing, dancing and so on. After joining the school and church choir, she eventually got a leading role in the school musical, it was from then that she longed to be a singer.

From an early age she knew that she would follow in her father's footsteps, so she enrolled at the Kingsway and Princeton Collage for Performing Arts where she was spotted by her manager while she was performing her version of Natural Woman by Aretha Franklin which is one of her favorite songs. At her age of 17, Ann-Marie was already performing live gigs in local discos and jazz clubs. As a result of this kind of work she was constantly in touch with other musicians and DJ's. Trough this she got the opportunity to sing live with the soul band Easy at the Hammersmith Odeon.

Towards her 18th birthday she joined the group Nelife as leadsinger. They produced their first track Got 2 Be Free which was immediately accepted by A&M. This was later followed by the second single Keep your lovin. Both tracks entered into the British Top Ten Dance singles and the album was a huge success in the clubs of Britain and America and as a result, Ann-Marie was established as the top Garage Singer to emerge from the UK. From then Ann-Marie had many offers to work on one-off jobs although she concentrated more on carving out a career for herself.

Right at this time Gianfranco Bortolotti of Media Records was searching world-wide for a new singer for the famous 49 ERS. The voice had to be perfectly suited. Finally he reached Michael at MCA, who was a personal friend of Ann-Marie's manager. After hearing a demo-tape of her voice Gianfranco knew that the search was over. Immediately after, Ann-Marie came to Italy to begin work on the new 49 ERS album.