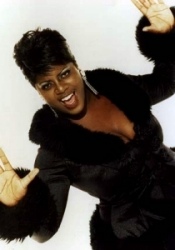 05/11/2010 : After almost 10 years of silence, 49ers are back with an single reminding of electro/retro style of Yolanda Be Cool & DCUP We No Speak Americano. It sampled the theme and voice of Charlie Chaplin's singing Je cherche après Titine in his movie Modern Times in 1936.

17/11/2002 : The 49ers' new single will be entitled Heart Escape. It will include some Mario Piu, Club and Cappella Remixes (thanks to Marlon Treep and Dance Artist Infos).

Project was named after the San Francisco 49ers American football team. The first single to be released by 49ers was Die Walküre in 1988. Song was based on a vocal sample from Freeez's I.O.U.. Josy Gil Persia was the frontlady for the project at this time (she was then replaced by Dawn Mitchell), Pieradis Rossini was also a part of the team. He was behind all the hits from the first album : Don't You Love Me (featuring a sample from Jody Watley's hit Don't You Want Me), How Longer, Touch Me (with samples from tracks Rock-A-Lot by Aretha Franklin and Touch Me by Alisha Warren), I Need You, and Girl To Girl, which all reached top 10 places in the charts worldwide. Rumors said that Dawn Mitchell was only a lipsyncer, however she was credited as lead vocalist on Touch Me, while Josy Gil Persia did backing vocals.

In 1991, Media Records boss Gianfranco Bortolotti was searching world-wide for a new singer for 49ers. Over a period of 6 months, a total of 5 singers came to Italy from America and the UK to audition for the new album. The voice had to be perfectly suited and Gianfranco didn't find what he was looking for. The search continued. Finally G.F.B. reached Michael at MCA, who was a personal friend of Ann-Marie Smith's manager. After hearing a demo-tape of her voice Gianfranco knew that the search was over (legend says that she was the 49th singer to be auditioned).

Immediately after, Ann-Marie came to Italy to begin work on the new 49ers album. Her desire to succeed made her all the more popular with the production team of Media Records who find her a joy to work with. The first single from the album Move Your Feet stormed the charts all over Europe and America reaching the first position on the world-wide charts.

Summer 1992 was the time for a double production, double success. 49ers released another great mix Got To Be Free obtaining big results from sales and press but it's with The Music Is Moving, the first track made with Fargetta, that she became the queen of the summer. The song was played in every radio, in all kinds of clubs and Ann-Marie was invited to many shows to promote the song and the new album, Playing With Me Heart, released in the Autumn 1992.

She is still at the first position with The Music Is Moving when Media Records released a new single of 49ers The Message which followed the others in success. In December she toured Japan with Mig and Cappella (both artists from Media Records) for a big media event. Then, a new production with Fargetta. This time she made new an old record by John Miels Music! Her powerful voice gave a different interpretation to this classic, giving the new generations the possibility to know it, love it and dance to it.

February 1993, the new single Everything got to the #1 position in 120 Italian radios and scheduled to be released by London Records. Within the first week of may, that got right away in the record mirror club chart at #5.

July 1993: Keep Your Love, a single that had very good response by the audience all over Europe. October 1994: The single Rocking My Body followed the bright walk of success like the previous ones. March 1997: The single Baby, I'm Yours was released, followed by another single called I Got The Music.

The 49ers hoped that the powerful Let The Sun Shine In would bring them more success. This track had strong vocals and was very suitable for the clubs.But it probably did not get the success expected, since afterwards, everything became very quiet around 49ers. The Media records team were busy with other productions.

2002 : on October 28th, a new single was released in Italy. Called My Heart, it included the B-side (Escape) My Heart.

2010 : in June, ZYX release some 2010 remixes of 49ers's hits Touch Me and I Got It. In November, after almost 10 years of silence, 49ers were back with an single reminding of electro/retro style of Yolanda Be Cool & DCUP We No Speak Americano. It sampled the theme and voice of Charlie Chaplin's singing Je cherche après Titine in his movie "Modern Times" in 1936.

Listen to 49ers on Radio Euro Classic, the eurodance radio