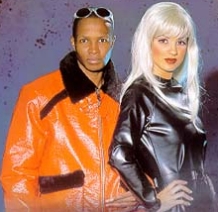 19/02/2002 : hot news about Imperio ! According to EAMS record company, they are back with new faces and a new single is being recorded... Let's hope this time it will be for good !

All has begun during a long drive to Italy. Producer Norbert Reichart had always been a great fan of old roman movies, such as Ben Hur, and he has always loved their monumental sound. He was always fascinated by the aura, the outfit and the way of living, which prevailed in ancient Rome. While Norbert was driving on the highway to the south, he grasped for his cigarettes. Suddenly the print 'Veni Vidi Vici' on the packet caught his eye. The idea to make a dancefloor song with these three words was born!

After having arrived at home, he immediately started working. The instrumental version was finished soon, but the vocals were still missing. This problem was solved by chance. Some days later Norbert met Manuela Ray in the disco Dorian Gray in Frankfurt. Legend says that Manuela, a girl from Vienna who was visiting a friend in Frankfurt, was dancing happy and lively to her favourite rhythm, and Norbert thought: 'SHE is the right one !'.

Then Norbert asked Manuela if she was also able to sing and instead of giving him an answer she turned round and went away; she thought he had wanted to give the come-on to her in quite a stupid manner! A lot of persuasiveness was necessary to convince her that Norbert was not joking. Then Manuela got interested in the whole story and two days later she was already in Norbert's studio: she listened to the instrumental version, read her text, started to sing and her voice was perfect...

After that Norbert begun the search for a suitable rapper, what turned to be a quite difficult thing. According to some sources, Norbert finally found him two months later in a very big disco in Budapest and his name was Paulo Martins, a portuguese rapper. Actually, first Imperio rapper was called Michael Harris aka "The Juice", and he had come from the US to Germany in 1994 as a GI where we worked in the kitchens, then he met Norbert Reichart. Before joining Imperio, he used to perform in groups called Cosmic Breakers and Fendis Five.

Single Veni Vidi Vici sold over 250,000 copies. It came along with a videoclip shot in October 1944 in Cologne, Germany. Apart from Manuela's vocals and Michael raps, it was also said to feature male vocals by Tyrone Vincent. Then came Quo Vadis, once again with a nice video shot February 1955 in Munich (Germany) at Bavaria Film Studios, on the set of sci-fi movie Enemy Mine.

The first album Veni Vidi Vici was released in 1995. All tracks were written by N. Reichart, except track V (Agnus Dei) which had been originally written by August Södermann (1832-1876) and revised by N. Reichart. It was produced, recorded, mixed & engineered by N. Reichart at NR-Recording Studios. All songs were published by EAMS Musikverlag. All vocals were credited to Manuela Ray & Michael Harris, nothing about a rapper called Paulo Martins (maybe he was just a dancer for stage appearances ? On early promo pictures, one could see 3 artists). Additional vocals were done by Tini Kainrath, John Freeman, Jahn Weib, Sara Valdemarin, N. Reichart himself, Bernd Taubel, and Lynne Kieran. Saxophone was played by Klaus Dickbauer, church choir was done by Union Chor Lambach, and strings by K&K String Quartett.

Manuela Ray and Michael Harris were also vocalists for another N. Reichart project : Decadance. They appeared on 2 singles : Latin Lover and Save My Soul.

Even though everyone thought that Imperio would remain forever with their original members, Paulo suddenly had to leave the group because of his dedication to his family and to his studies back in Portugal. The name of the new male part of Imperio was Lawrence Madia, a good-looking and talented dancer.

The new single from Imperio was first planned for Autumn 1998 and was regularly postponed. After the single the 3rd album would be released. Finally after more than 3 long years of silence, Imperio will be back on the 23rd of January 2001. During the MIDEM in Cannes, the new Imperio single was introduced to the music industry. Finally it's not Last Pharao as it was announced previously but a track entitled Voices Of Eternity. The faces of the project have changed too. Imperio is now making the video to the new single, the album is coming in May 2001.

Voices Of Eternity was to be available together with cool remixes. The project said they were just waiting for the approval by the record company, which was preparing a big marketing and promotion campaign. Actually nothing was ever released during the year 2001.

2002 : EAMS announced officially the return of Imperio, with new faces (2 boys and a girl), and a new single being prepared... Will we have one day the pleasure to see them back for good ?

Listen to Imperio on Radio Euro Classic, the eurodance radio