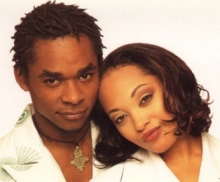 25/09/2009 : Clock re-released their hit Everybody in a 2009 version under Big In Ibiza Records. It is available as digital release only. Buy it here (thanks to Dance Music News).

When British DJ and producer Stu Allan turned up at Media Records saying "I've got an idea for a record" few could have foreseen that the idea would be the start of the career of one of the most successful pop-dance groups in the 90's -Clock. Why 'Clock'? When asked about the name Stu laughs "Why not? You remember the name don't you?! That's the only reason - it could be anything really!".

That first Clock single Holding On featured Media diva Ann-Marie Smith on vocals (as well as one of the following singles Whoomph There It Is, a cover of the Tag Team hit), and composed by Stu Allan, Bortolotti , Leoni, Persona and some others. Holding On was allmost a Cappella song... But with Ann-Marie's extensive commitments elsewhere and the demand for club P.A.s growing as the single took off, Stu and co-producer Peter Pritchard decided to form a more permanent ensemble to record and perform future Clock records. Several different performers were tried and even toured as Clock in those early days (such as Lorna Sauders for Everybody, Alison Williamson for the single Rhythm, or Georgia Lewis for Keep The Fires Burning), but it wasn't until 1994 that the production team found the two people who were destined to join the band full-time and take them to the dizzy heights of the UK Top 20 chart time and time again.

ODC MC and Tinka were the two hot new performers that Stu discovered. ODC MC was running his own dance troupe and practising his rapping on the side, and Tinka was a law student who just happened to attend ODC's classes. The two of them created a unique persona for the band and their live gigs were legendary, with recent PAs on the P J and Duncan (where they stole the show) and Smash Hits tours consolidating their live reputation and earning them the nomination for Disco Club International's Best P.A. of the Year award. In 1995 alone they played over 250 gigs in the UK !

Since the limited club release of Holding On, which went to no.1 in the Dance Sales chart, every one of Clock's singles has gone Top 40 in the UK National Sales chart (compiled by CIN) and 1995 has definitely been their year with three top 10 singles and a Top 30 debut album to their credit. In the end of 1996 they released a single called It's Over

In 1997 Clock first released a single called Don't Go Away. In November they released a single called U Sexy Thing, a cover of a Hot Chocolate song, which according to rumors was delayed to avoid a clash with a rival release by a project called T-shirt. An album called It's Over was also released. ODC MC collaborated with the project Tzant in the single Sounds Of The Wickedness, and the result was a top 20 hit.

In February 1998 Clock released a single called Thats the Way (I Like It) and it's a cover of an old song. In July the single Rock Your Body was released. An album called Boogiestand (or Boogie Sound ?) was released in Japan in 1999. At this time, ODC MC was replaced by a new rapper called Segun or Ché-Gun Peters.

1999 : Everybody was covered by the Swedish project Razzia.

In 2000 a sort of best of album was released in Japan, called Hits Around The Clock.

2009 : Clock re-released their hit Everybody in a 2009 version under Big In Ibiza Records. It is available as digital release only

Listen to Clock on Radio Euro Classic, the eurodance radio