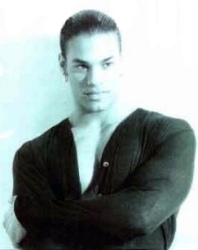 Marcus Patrick Osbourne was born in Bath, UK, on June 5th, 1974, and carries a mix of Irish, French, Jamaican, Cuban and Cherokee blood in his veins. Marcus excelled in piano, gymnastics, and swimming. He also took up Tae Kwon Do, and became the Junior and Mens Heavyweight champion. After auditioning for American Idol at the age of 17, Marcus toured in the boy band World Apart until he was 20 years old, and he decided the tile was ripe for a solo singing career.

He got signed under Media Records and released eurodance single Love Me. Female vocalist was thought to be Ann-Marie Smith but rumors say that it was rather Beverley Skeete. Patric was thought to replace Rodney as rapper for Cappella and did a few shows with new vocalist Alison. Patric left Media Records after a European tour, realizing that his contract was quite unfair to him.

Then he moved to the United States, where he mainly supported himself as a personal trainer, while taking acting lessons in addition. After moving to Los Angeles, and meeting with Gar Lester of what is now The Gar Lester Agency, Marcus Patrick's acting career started rolling into the right direction. He played in several feature films and did numerous TV guest appearances, for instance in an episode of CSI:Miami in 2005 and in From All My Children, in which he played the character of Jamal Cudahy in 2006. Then he joined the cast of Days Of Our Lives, playing the role of Jet Carver, and it is this series that brought him back on the front pages.

An album was planned for 2007. He appeared in the movies Descent and Love and Other Four-Letter Words. He also had a role in the 2008 film Burning Sands.

2010 : Marcus Patrick appeared in "Violet Tendencies" where he played one of the main roles.

2013 : he starred in movies "The Dark Party" and "Hollywood Chaos" and in TV series "Body of Proof".

2014 : he appeared in the movie "The Dead Sea" and in TV series "Real Husbands of Hollywood".

Marcus Patrick is a Bob Marley fan, his favorite song is One Love.

Thanks to Paris Gayzine and Klems

Listen to Patric on Radio Euro Classic, the eurodance radio