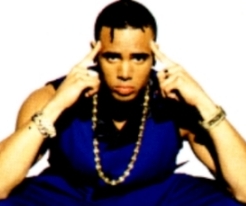 03/06/2013 : On May 25th, Ray Slijngaard's third child was born : a baby boy named Noah Raymond. A biography about Ray written (in Dutch) by Robert Heukels is planned for August 13th 2013 under title Ongelimiteerd (het grenzeloze leven van Ray Slijngaard). (Thanks to Krasi)

08/02/2013 : Discover the videoclip of Ray Slijngaard's current project The Dutchables What U Waitin' 4. (Thanks to Krasi)

2 Unlimited rapper Ray Lothar  Slijngaard was born on June 28th,1971 in Amsterdam, in the same hospital (Wilhelmina Gasthuis, which is located in the southern part of town) as Anita Doth, his future partner of 2 Unlimited. He is 1,73 m tall, weights 66 kg and has brown eyes and hair. His father Lothar Rudolf comes from Surinam (he is a cooker) and his mother Ingrid is Dutch (she breeds pure-breed horses). He was a bright student but very lazy. As he was bored in class, he used to write raps.

Ray was a chef (cooker) at the Netherland's Schiphol Airport, and he dreamed of becoming a musical star. He also was a breakdancer. But, he said, 'I didn't realize I could make a career of it.' A friend of his, also a rapper, Marvin D, was a member of a successful rap group. But during one show, the crowd wasn't hyped, so Ray took the mic, 'and started rapping. The kids went crazy and I guess that's what started it all.'Before long, he was put in touch with producers Jean-Paul DeCoster and Phil Wilde . He also suggested bringing in a female vocalise who turned to be Anita, a singer he knew from the club scene in Amsterdam.

Ray used to have a Persian cat. In interviews he did during the 90s, he used to find himself handsome and nice, telling he loved women and admitted not to be not very faithful to them. He loves cooking, dancing, rapping, boxing, but also his mother and his mobile phone. He used to drive a sports car : a Honda Space Shuttle (some said a Ferrari...). His favourite Eddie Murphy and Kim Basinger. His preferred book is The Silence Of The Lambs. He is fascinated by paranormal and buddhism. He'd really like to stop smoking. His favourite colour are black and blue. He would like to spend a holiday on Mars.

While he was rapping for 2 Unlimited, he found some time to appear in a Dutch TV film entitled Do The Right Thing which dealt about racial problems. he finally bought a big house in the center of Amsterdam to live closer to his parents. He hanged all his gold records at the walls of his new home. He liked training his raps in his bath because the acoustic is good there. The song of 2 Unlimited he likes the least is Maximum Overdrive.

After 5 hectic years as 2 Unlimited rapper, his contract ended in 1996. Anita and him both decided not to extend it for another 5 years. After they left 2 Unlimited, they were going to call themselves the A & R Foundation or just simply Ray & Anita. Many record companies offered them a lot of money to go on together, but because Anita wanted to do more dance stuff and Ray wanted more Hip Hop/R&B (he especially likes Dr. Dre, Ice Cube, and Snoop Doggy Dog, who is his favorite. He also likes old school like The Sugar Hill Gang, and the Naughty by Nature) they decided not to go on together.

Another explanation was that, contrarily to what they usually said during interviews, Anita and Ray were a real couple, but finally success separated them.

In August 1996 he recorded a cover track called Smoke On Water with Ian Gillan (from Deep Purple) under the name Rock'n Rap Extravaganza. The single was produced by the Bolland Brothers, released in Europe in 1997 and in Japan in 1998.

In April 1997 Ray released his first solo single called Three Times A Day, simply under the name Ray. The single was composed and produced by Jay Vendenberg and Eddy Zoëy, released under his label Rayvano. 3 X a Day was an R&B track, unfortunately. R&B was the kind of music he really likes and that's why he chose for this style. The single went #66 in the local charts. An album was also planned, with the same name, but finally never released.

The same year came another single, Do You Think I'm Sexy, feat Dignity.

Later on, Ray teamed up with VIP allstars. In 1999, with the rapper Strezz and Orpheo (ex Ke-Shaw) he recorded When It's My Turn. Then came Mamacita the same year (a remixes CD was even released in 2000).

2004 : Unverified rumors said Ray was in a bad period since he has ran out of money. Which is somewhat surprising since he still owns the rights of the texts he wrote for 2 Unlimited, which should bring him about 200000 euros yearly. He could have kept on taking drugs (accorded to people who met him, such as Daniel Peyer and Gerd Jakobs, he used to smoke haschish, drink vodka with Anita, and take cocaine to be able to cope with the pressure at the time when he was in 2 Unlimited) recorded When It's My Turn.

2008 : Rumors proved to be false, fortunately. Ray now lives in Monte Carlo with his wife and children. He had plans to release a new single called The Anthem to be taken from a new album entitled Alien Nation under the name Raytec in September.

2009 : Ray and his family moved in the south of Spain. In January, Ray started working on a dance track with Rachel Stevens, a cover of the Wendy Moten classic Come In Out Of The Rain. In April, for the first time since 13 years, he performed with Anita on the stage of the show I Love The 90s. One month later, they performed for the Queen's Day in Amsterdam.

2012 : he became member of a project called The Dutchables and recorded single What U Waitin' 4.

2015 : he released his autobiography, a book entitled "My Unlimited Life".