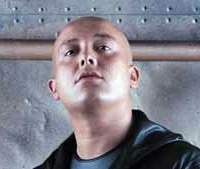 23/08/2013 : Rene Dif (Aqua) will soon release a new single under the alias Ferrish Key. Dance All Night will be featuring with Kaya Jones from the Pussycat Dolls (who had previously collaborated with Regi Penxten) on vocals. (Thanks to Anders Bøgh)

06/08/2013 : Aqua member Rene Dif will soon launch a jewels collection under name Dif Jewels. A kids/teen collection will then be followed by an adult collection.

Rene was born on 19th of October 1969 in Copenhagen. Brown eyed and dark haired, he is 1,89 m tall and weights 89 kg. He has one sister and two brothers. His parents work in a hospital. He likes reading Stephen King, listening to the Babyface, watching the Jerry Springer show, eating hot'n spicey food. He drives a Ferrari 355 F1 Berlinetto. His favourite film is Moonbase Alfa. He has no pet for the moment, but he would really love to have two dogs. His favourite hobbies are cooking, watching video and sleeping. He has a bad habit : biting his nails. Before Aqua, he used to be a DJ, a window cleaner, a butcher, and a chef. In many years, he thinks he'll keep on working on music, probably remixing for others. He was also rapper for the Swedish euro project Factual Beat.

Gravel voiced René played the Ken to Lene's Barbie in the band's massive first hit, and the song holds hints of René's background as a rap artist. He was also a Hip Hop DJ in his native Denmark, and it was while he was spinning platters in the studio that he first ran into Claus and Soren, about eight years ago. He made his own particular contribution to the band when he found Lene Nystrom and asked her to join them. And the rest, as they say, is (rather long) history. His own musical influences are chiefly rap and soul, which must be pretty obvious from listening to Aquarium, the band's debut album, and its those brilliant rap contributions that help give the Europop flavor a bit of weight. Now that Aqua's a massive success, René appears to be finding life rather fun. When asked recently what the best thing about being in the band was, he replied,  'Everything! It's amazing that you can travel so much and meet people from all over the world.' He was particularly chuffed when the band were given a gold disc for selling a squillion copies of Barbie Girl in the States, and their record company threw a huge party for them in Hollywood. One drawback about life in the fame fast lane, though, is being separated from his family. René acknowledges the support all their parents gave to them before they made it big and now he spends time with his family 'every free minute'. When the band are away, which is pretty often, these days, he says they all telephone home every day. One assumes, then, that his phone bill this year is going to reach mega-proportions, as the band are about to embark on a string of dates all over the world.

2008 : by the end of March René will release a second single under the same name All Up To You.

2011 : Rene Dif will appear in the comedy serie "Kvægræs" on Danish TV2 Zulu.