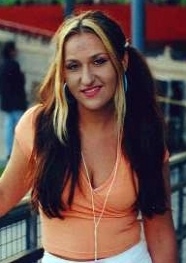 06/10/2019 : New from Tina Safrany, song Music Was My First Drug. It was produced by Uwe Köhler-Safranj and Gerd Hesse for NTB Records, and should be out on October 8th (Thanks to Eurodance Magazine)

02/10/2018 : Kristina Safrany (the voice of First Base, Megatronic, Masterjam...) will release a classic eurodance single in collaboration with rapper Freeze and composer D-Base (Digital Base Project) on October 12th (thanks to Andrei)

04/05/2013 : Tina Safrany's song Freeway was remixed by EuroDJ, and an official videoclip was shot (Thanks to Klems)

Kristina (Tina) Safrany is not only a singer, but she is also a composer. She was born in June 26th in Jettenbach (Germany), with Hungarian origins. She studied in Schloss-Schule Kirchberg then in PH Schwäbisch Gmünd. She started her musical carreer in 1992, just after graduating her Abitur.

After contributing to Dance Device, she took part as studio vocalist to eurodance groups such as Space Mission (Red Martian) and Chart Houz (Take Your Love Away). As Tina S., she was the voice on Get The Real Power In The Heat Of The Night and Stereotype - And The Beat Goes On . Under the name of Christina, she appeared on Project P - I Give You All My Love and Megatronic - Into The Fire. She joined JAP Davis as C. Safrany and sung vocals for Black And White and Walking On Air. She appeared on Masterjam - I Wanna Know under the name Chrissie.

She became the female vocalist of the First Base project under the name of Viktoria as she was 25.

She lived a while in Sattledorf, a small German village, Sattledorf, and she is the mother of a boy called Juljan.

It is more doubtful that she contributed to Joy's Orinoco Flow '93 (Sail Away) (a remake of the 1988 Enya classic) because that track was released under an Italian label, and when you listen carefully, the vocalist has rather an Italian accent.

Tina teamed up with her husband, pianist Uwe Köhler. They gave appearences, singing covers of classic ballads and gospel anthems. She recorded a CD entitled Vocal And Piano Dreams that cound be ordered on her official website.

2003 : Tina can be booked to sing during weddings and private events.

2018 : she teamed with rapper Freeze to record single You Taught Me How To Love.

2019 : Tina recorded two great classic eurodance songs and videos entitled Love Is The Power and I Believe In Love. She still sings in weddings (about 80 weddings per year), and was even filmed in an episode of real-TV show Vier Hochzeiten und eine Traumreise... She performed in May in Peru, where she has a big fanbase, on the stages of 2 shows : Recordando los 90s and 90s Lover Fest. She nowadays lives in Beilstein-Jettenbach.