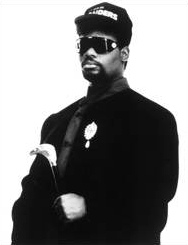 17/01/2014 : You can discover and download Jason Dean's remix for Turbo B's new song Last Call for free on his Soundclound account. Turbo B also visited The Company's song Party Like This (Thanks to Krasi)

30/12/2011 : After 19 years, Turbo B and Thea Austin appeared together again on stage, during a Justin Timberlake benefit concert called "JT & Friends", in october 2011 (thanks to Dato Oliver).

04/08/2009 : Turbo B did a collaboration with rappers duo Rumanetsa & Enchev and the Holland singer Miss Romagna from the band R.O.O.M. The result is entitled Don't Cha Know. The single already entered the Bulgarian radio charts last week and will be released later as a maxi in America, Holland, Turkey and Romania (thanks to eurodance blog and Krassik).

He was born on the 30th of April 1967 in Pittsburgh (Pennsylvania, USA). He is 1,95 m tall. He started his musical career as drummer with a heavy metal band in his hometown

He was sent to Frankfurt in 1985 by his Uncle Sam to become a bomb disposal expert. Rico Sparx and Moses P discovered he was a first class rapper and human beat-box. After his discharge he returned to the USA but went back to Germany to continue his musical carrer.

His talents earned him spots with acts such as Maze and The Fat Boys. He has shared the stage with such artists as Chaka Kahn, Michael Jackson, Natalie Cole, Sinbad, Hall & Oates, and even Tom Jones. He also collaborated with Mark Spoon.

Germany-based producers Benito Benites and John Garrett Virgo III, had put together a project they would call Snap!, after a function on a sequencing programme. They recorded a song called The Power which was built from samples of New York rapper Chill Rob G (Robert Frazier)'s Let The Rhythm Flow. They added the powerful female backing vocals of Penny Ford. The record was first released on the Wild Pitch Records label in America with the credit Snap featuring Chill Rob G. However, after the first 30.000 sales, problems with Chill began to manifest themselves and they sought a replacement. They chose Butler, who was renamed Turbo B.

Chill was allowed to release his own version of The Power in America. Around the rest of the world a new version, featuring Turbo B, topped the charts. To promote the record, Turbo and Penny Ford toured widely, before she started on a solo career and was replaced by Thea Austin. Whereas they continued to score colossal hits with Oops Up, Cult Of Snap and Mary Had A Little Boy, dissent had set in. Turbo wanted more artistic input, and contested the choice of Rhythm Is A Dancer as projected lead-off single for the band's second album. He told that he hated the song and influenced the producers in their decision to release The Colour Of Love instead. The single flopped, whereas Rhythm Is A Dancer became another international smash (the biggest selling UK single of 1992). By now the rift between the parties was irreconcilable. Turbo had signed up for a solo career (debuting with I'm Not Dead on Polydor Records, with vocals by Thea) while the Snap! single was still climbing in several territories. Thea Austin too found herself a solo contract.

1999 : he released a single featured by the ex cover-girl Victoria Silvstedt (Rocksteady Love).

2002 : a single was released, entitled Quest featuring Turbo B : Lonely. It was released under ZYX Music

2003 : Turbo B was back with Snap for the singles The Power 2003 and Rhythm Is A Dancer 2003. Then he was featured by Master Blaster on their new single Ballet Dancer.

2005 : Turbo B appeared with Snap in the German TV show Ultimative Charts Show in June. He rapped on The Power, along with Garcia's former vocalist Ouided Khachnaoui. He recorded a new solo single : New Day which will be released on September 26th.

Remixes done by Turbo B

Thanks to nolimits, Necronomic, Denis "DJ Hooligan" Zhabkin and D-man '94 for the latest informations


Links to Turbo B

Turbo B at Dirty Sounth entertainment

Complete your Turbo B collection

More about Turbo B

Listen to Turbo B on Radio Euro Classic, the eurodance radio