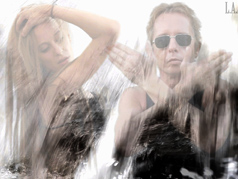 04/07/2018 : LA Work producer Alexander Louvet now works as an interviewer for Positive Energy in Europe, a Youtube channel of Powershoots TV. His most recent interview was made from the audiovisual studios of the European Commission

24/02/2017 : Monotone feat. LA Work performed at Zillion.XXX The Final Rave in Antwerp Sportpaleis on February 17th (thanks to Alexander).

16/02/2015 : LA Work present you for Valentine their collaboration with women's choir Exodus : Somebody to love. Last year for Valentine a first version of the song was released.

18/12/2014 : LA Work's new single is a collaboration with Exodus entitled Somebody to love.

L.A. Work, alias Alexander Louvet (artist, producer & remixer), has been on the music scene since 1990 and to all insiders is far from an unknown figure... As the only professional dance artist from the German-speaking side of Belgium, he got with the maxi-singles In Memory Of ..., Get Ready Make Love, Is It Real..., Crazy Boy, I Like Sex, Diamond In My Heart and Imagination the international recognition he deserved.

It all started with the release of the maxi-single In Memory Of ... in 1991, and with the mini-album Get Ready-Make Love, in 1993. During the Midem 1994, L.A. Work was chosen by Sabam as one of the "Top 20 Belgian bands for the future". In 1994, Alexander founded his own label "The A.L.C. Productions", a production (2 studios), publishing and promotion company ; promoting most of his productions himself.

Midem 1995 was where L.A. Work signed a worldwide contract thanks to Is It Real .... This track was a co-production between No More/EMI Music Publishing and was produced by Serge Ramaekers & Dominique Sas, famously notorious for Confettis Sound of C and Living On My Own by Freddy Mercury.

L.A. Work on the stage consisted of Alexander Louvet himslef with his partners Tamara and Shirly. Since the start they had a long line of live gigs, touring with N'Sync, Whigfield , Snap , 2 Unlimited , Marlboro Music…

The follow maxi Crazy Boy was recorded by Koen Tillie (Claudia Chin) together with Ramaekers/Sas. This adaptation couldn't have been more suitable because this is the whole lifestyle of L.A. Work ... "Be crazy, have fun !". Koen Tillie, also worked on the following maxi-single from L.A. Work entitled I Like Sex. This dance track was shown in premiere at the Calypso Club in June 1996.

1997 : L.A. Work released the maxi Diamond In My Heart. In August, at the CD presentation in Euskirchen (Germany) in front of more than 10 000 people, the band confirmed to be one of the best dance acts Belgium has to offer.