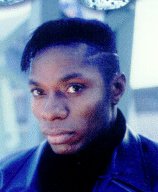 26/09/2014 : Today sees the release of Captain Hollywood's collaboration with Marc Lime & K Bastian Heat (Turn Me On). Single comes along with plenty of remixes, including one by Sash! (Thanks to Krasi)

03/06/2013 : Scotty made a new version of Captain Hollywood's hit More And More, featuring Tony's raps. Single includes mixes by Movetown, Killmode vs Fun(k)house, Tom Belmond and Housemaxx and CJ Stone (thanks to guillaume)

13/12/2012 : End of January, Captain Hollywood will release the versions of his greatest hits on which he performs on stage. There will be Stage versions available for More and More, Flying High, Impossible and Find Another Way, as well as his show intro titled Head Bangers Ball. These songs will be available for purchase from Captain Hollywood official online store only. Meanwhile, you can already check this store to complete your collection...

Tony Dawson-Harrison was born in Newark, New Jersey in 1962. He spent the first year of his life in New York. Then his mother died and his father left him with his sister. They spent 2 years in Detroit in orphans institutions. Then Tony began a life as a streetchild, made a few money as breakdancer, and finally joined the army at the age of 16. He came to Germany as a soldier with the US Army in the 80s, near Frankfurt then in Nurnberg, and began to work as a choreogropher. His nickname Captain Hollywood was given to him by his military friends in 1982, because he danced even when in uniform.

During the week-ends he used to go to discos, that's how he was spotted by Andreas Thiesmeyer, producer of the TV-show Formel Eins, who immediately wanted to work with him. He did choreographs for La Toya Jackson and CC Catch and even went with them on tournee. He appeared in German cult movies (such as Macho Man) with famous boxers, and represented Germany in Cannes in 1984 for the breakdance movie premiere of Beat Street. He also contributed to increase breakdance's popularity in Germany.

Meanwhile he was a member in the competition juries for breakdance. That's how some of his colleagues suggested to Tony that he could sing. 3 singles, which entered the Clubcharts, came out. Among them was Grand Piano, on which he appears under the alias of The Mix Master. It was a hit, reaching #4 in Great Britain, # 2 in France and # 10 in Germany.

In 1987 he met the producer Ruud van Rijjen and together with the female singer Nance they established the group Twenty 4 Seven. The first hit I Can't Stand It reached #7 in the UK chart and #1 in several European countries. He also took part to their first album. During 3 monthes they toured with MTV Europe, sponsored by the watch company Swatch.

That's how he began his cooperation with the two german dancers. Hanks (Giovanni Falco) & Jacks (Wolfgang Reiss), who followed him when he left the project in 1989 because of a disagreement with Van Rijjen.

In 1988 he released a vinyl single in collaboration with BPM (no relationship with the German project) : Jaybee / Tribute. It was produced by La Fong at Preussen-Studio, Berlin-West. Label : P1 Records.

He signed at the 'Get into magic' label and started a new project with Nosie Katzmann and Giora Schein : Captain Hollywood Project. His voice at the very beginning of Twenty 4 Seven - Are You Dreaming ("kick it one time") was also sampled and used on Italian single Pumping Up by Italian project Thunder.

In 1995, he contributed to an eurodance project name The Vision. This project only released 2 singles. He was also featured by Jenny J for the single Eat Me and once again the same sample used in 1993 appeared as intro for B.A.R. feat. Roxy's Feeling.

During the years 1999 and 2000 Captain Hollywood spent his time between his own studio in the Rhine country and the USA, where he worked with the HipHop legend Pete Rock and with Ol' Dirty Bastard. He made some mixes for the Dance HipHop duo R'n'G (Alex Christensen & Toni Cattania), the Dance project Black Bone (Another Day in Paradise) and even DJ Bobo. And he produced the youngest Shooting star of the ex-N'Sync-manager Lou Pearlman, the Boy Quintett O-Town. Especially for this a 48-people television team of the ABC channel, not forgetting an MTV US team, traveled to Germany in order to shoot a report which became a series with 12 million spectators weekly. Tony's last production was a single for Tiffany featuring Krayzee Bone.

He also provided the deep spoken-voice passages on the Ofra Haza song One Day from her album Ofra Haza. An interesting coincidence is that in this spoken passage Tony very clearly stresses the words "more and more", which was the title of one of his best-selling song.

2001 : Captain Hollywood is back ! He released his first new single Danger Sign under his own name since 1995, on May 14th. After a live show in Köln on the 20th of May, he took part to the broadcast "Disneyclub" on RTL on the 26th, and on the 3rd of June, he was present at "The Dome" on RTL II.

2003 : Captain Hollywood is back with a remake of Axel F. theme. He released it under the name of Murphy Brown vs. Captain Hollywood. The single is entitled Axel F. 2003 (under the label BigRoom). He reached #17 in the German DJ Playlist Charts (which has 200 places in total). Pushed by this success, he teamed up with Boom Boxx (Alex, Jesse and Max) and released Flying High 2003, an excellent remixed version of his old hit. Then in October, they covered the Outhere Brothers' track Boom Boom Boom, which was used as anthem for the German event Berliner YOU 2003.

2006 : Tony Harrison does not make records anymore : "I had a great time and a great career so im very satisfied with that" he explains. He is now vice-president of an American record company by the name of Skreem Records U.S.A in Orlando Florida, and they are currently working on projects such as 3rd Wish (a latino band), Patmoe (from the dirty South of Atlanta), and SKREEM.TV (the number 2 online streaming video channel in the U.S, playing 24 hours 7 days a week all of the best U.S videos from hiphop rock country pop RnB). He settled in St Pete Beach, a beautiful beach in sunny Florida, but he still comes from time to time to Nuremberg. He married his girlfriend Shirin von Gehlen.

Captain Hollywood has finally decided to go back into the studio and record an original track entitled Love Dot Sex.

He has received 1 Diamond Award, 12 Platinum records and 14 Gold records.