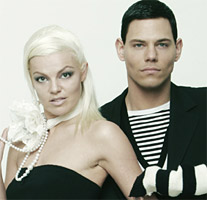 01/03/2019 : Infernal released a collection of rum bottles, for sale from today Friday March 1st at 12:00 (local time). The bottles sold during the first 30 min will be signed by Infernal members.

16/07/2017 : Infernal released a remix package for their single Holding On

The band Infernal started up consisting of the members Søren Haahr, Paw Lagermann & Lina Rafn. They did the first single Sorti De L'enfer without any real plans of doing more. The song went on to become a hit in the danish clubbing scene, and the members had a great time working together. So they decided to do more songs and eventually an album.

The album Infernal Affairs as well as the singles Highland Fling, Kalinka, Voodoo Cowboy and Your Crown all enjoyed big succes in Denmark, and Infernal almost instantly became one of the biggest names on the danish dance-scene.

When starteing the preparation for their second album, Søren Haahr decided to leave Infernal and pursue the career as DJ he already had before starting Infernal. Later he also started doing solo things as Red$tar.

Lina and Paw continued as Infernal and soon got yet another big hit in Denmark with the single Sunrise, followed by Muzaik and the album Waiting For Daylight.

The Danish version of the TV-show Big Brother had the year before gotten big succes letting DJ Encore do the themesong of the show, and they now turned to Infernal for the same. They did You Recieve Me which went on to become a big radio- and clubhit. At the same time Muzaik had become a hit in the clubs, and Infernal decided to rerelease the album Waiting For Daylight with a new name Muzaik and now including You Recieve Me and the next single Let Me Hear You Say Yeah! which became yeat another hit in the dancecharts.

The next album had a long way comming. Infernal had started doing a lot of writing and producing for other artists, and at the same time their chill-out tracks from earlier albums was starting to get succes on chill-out compilations round the world. Also feeling like doing something new, they did a lot of experimenting in the studio, they did a lot of tracks but couldn't seem to fit them together as an album.

A year or two passed and former band-member Red$tar now contacted Lina and Paw wanting help with a idea for a new single he wanted to do. Sampling from the old The Grid hit Swamp Thing they did Banjo Thing, and when it was ready for release it was decided to be released as an Infernal feat. Red$tar single and not a Red$tar single. Banjo Thing became a massive hit on the danish dancechart.

The single From Paris To Berlin became Infernal's biggest hit so far, recieving massive airplay on radios and going #1 on the dancechart in Italy, Denmark, Poland, Sweden, Norway and Finland and #2 on the Swedish dancechart and the Scandinavian dance chart. It also went top 10 in France's sales charts and was the 3rd most sold in the UK in 2006. Videoclip was inspired from sci-fi movie Tron.

So far the new album From Paris To Berlin has only been released in Denmark going top 20, and in Finland going top 50. And the new single Keen On Disco went #2 on the danish dancechart, #6 on the Norwegian dance chart and #15 on the Finnish and #6 on the Scandinavian.

The single Cheap Trick Kinda' Girl was #5 on the Norwegian dance chart, #19 on the Swedish and went #10 on the Scandinavian.

September : Infernal was nominated at the Nordic Musik Awards with From Paris to Berlin

November : Infernal released their new single A To The B. It entered the danish dancechart as #22. They released an international version of their album From Paris To Berlin on 28th November, with 4 new tracks on. They performed live at Club Aquarius, Pont du Château, France on 10th December. They have been nominated for danish television TV2-Zulu's Zulu-award for best danish hit (From Paris To Berlin) and best danish female singer (Lina Rafn).

2006 : Ten Miles was released in April. From Paris To Berlin continued its succesful career in the UK and Ireland when it reached the highest charts positions.

2007 : Infernal released a new single I Won´t Be Crying to the radios. It will be out in January and it contains a sample of a Depeche Mode-track. The video was shot in Paris.

Self Control enjoyed 5 weeks as #1 on the danish download chart. They was also the only act to have 2 of the top 15 most downloaded tracks in Denmark in 2006. They were nominated twice at the NRJ Awards which took place in Helsinki, Finland, on the 19th January, but they did not win.

In May they finished their new video for their song Ten Miles.

After a re-release of Infernals album From Paris To Berlin in Denmark (a new version, including I Won't Be Crying and Self Control) the album this week is at #3 on the official danish album chart. It's highest position ever, and counting all three versions of the album released in Denmark it has been a Top 100 album on the chart more than 100 weeks in a row!

2008 : in February, the group announced they were approximately half way into the making of their next album. In May, in was completed. They are aiming for a release late 2008. The new single Downtown Boys was out in May. It reached the Top 5 single chart in Denmark the day of its release The video was directed by the Belgian Loic Maes, who had already direct the clips of Ten Miles and I Won't Be Crying.

Infernal's next single was entitled Whenever You Need Me. The music video was shot in New York in June, directed as usual by Loïc Maes. It was released on August 4 to exclusive members of their official website. An international release is planned.

The next single is entitled Electric Light. The videoclip was shot in Brooklyn, NY.

2009 : Downtown boys was nominated at DDJA 2009 awards. They did a big concert in May 6th, the show will be recorded and released on a forthcoming DVD named after the show : Live DVD Electric Deluxe Edition. The DVD will be released at the end of 2009, the concert will include a little acoustic part at the begining of the show

The video for the follow-up single Redefinition was released, as usual directed by Loic Maes. In June, they started their summer tour, 30 dates through Denmark.

Their album Electric Cabaret reached Platinum status in July. They went back to studio to start working on the following album. Concerning the style of the future album, all they know is that "we want it to be a little less feathers & sequins and a bit more jeans & T-shirt’ish", as they announced on their official website.

2011 : in March, Infernal released a new single entitled Speakers On, a collaboration with Kato. In September Lina took part to the Danish version of real-TV show Sa mycket battre.

2012 : In April they released the videoclip for their remixed, international version of Love Is All, including a few scenes from the original version's videoclip. In June, they premiered the video of a single entitled Stolt af mig selv? (Proud of myself in Danish) under name Paw & Lina, a sideproject of Infernal. Infernal's new single came a few months later and was entitled Can't Go Back. They shot the videoclip in New York City in October, and it was directed by Loïc Maes.

2013 : in September, they released a live EP entitled Put Your F**king Hands Up.