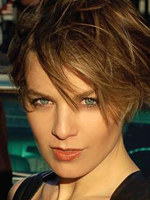 07/09/2019 : You can vote for Gala - Freed From Desire to becore the official song to celebrate goals by French national soccer team

04/07/2018 : 3 songs by Gala were featured on Italian movie "Favola" original soundtrack : Nameless Love, Happiest Day Of My Life and her 2008 song Tough Love. The 2 first ones will be released on digital platforms in August.

28/05/2018 : Last Saturday, Gala shot a music video in Holland for her song Parallel Lines. This song was awarded best pop song at the German Songwriters Awards 2 years ago.

Gala was born on September 6th 1975 and grew up in Milan. Her name was inspired by Salvador Dali's wife's name, and at the same time by the famous Russian dancer Gala Ulanova. She attended a very strict high school in Italy. Then, as she was very curious, she travelled round Europe. During her stays in various European places, she studied Flamenco in Madrid (at the "Amor de dios" dance school"), she was assistant photographer at the Superstudio for a time, she also studied at the Laban Center in London and at an art school in Boston. Finally, she arrived in New York, where she lives now. She stills come from time to time in Madrid.

In New York, she attended the Tisch School of Arts, within the New York University. That school is known as a crossroad of artists of different cultures ; Spike Lee also studied there. Gala enjoyed this "melting pot" atmosphere.

Gala liked Art from the very beginning, and since then she tried everything she could to know everything concerning Dance styles and music instruments, from ballet to African dance (under the guide of Babekar M'Baye from the National Ballet of Senegal), and from drums to voice via the guitar. She is looking for all the possible connections among the different forms of art and is open to all the possible "contaminations". She found out about her original passion for singing while directing a pop video for a well known Italian singer : as she was "taking pictures of a deejay", this deejay accidentally heared her voice. This is how her first song XS came out on the album "Originale Radicale Musicale".

Her own first single Everyone Has Inside was one of the hits of the winter '95 and also one of the most played records from the most important Italian radio stations, reaching the top of the sales charts: #1 position for a few weeks consecutively.

She had the real consecration, with her second single Freed From Desire. After having the #1 position for 4 weeks in the Italian sales charts, she became a European reality : Spain, France (#1 for 6 weeks), Belgium (#1 for 8 weeks), The Netherlands, Germany (# 14), Scandinavia, Greece, Israel (#1 for 2 weeks) and even United Kingdom (where she sold over 500.000 copies and reached #2 and 15th best selling single of 1997) were the countries where the song had the major success. Gala entered on the list of nominations for the "Best Dance Act" of the "1997 Mobo Awards", together with artists like : Prodigy, Blue Boy, Chemical Brothers and Orbital. Soon this very big hit was also officially released in Japan and in the U.S.A. were it ranked #1 in US Billboard Dance.

Gala was awarded the best female artist of 1996 by the official monthly magazine Musique et Disques, the best pop-dance artist of 1996 in France (where she sold almost 2 million copies - diamond record !), the female singer of 1997 in Israel, and the Italian revelation of the European market. In July 1997 she was again awarded with the "Italian Dance Award" as the best pop-dance artist of the year and also the producers Molella and Phil Jay receive their award for the "Best Producers of the year". In the whole, the single sold 5 million copies worldwide

In January 1997 the third single Let A Boy Cry was released, pop-dance style, for which she received a platinum record in Belgium. It peaked and remained #1 for 3 weeks in Israel, # 12 in UK, # 1 in France and Belgium. This single sold 3 million copies worldwide. It was followed by her 4th single Come Into My Life, released worldwide on the 4th of November 1997. It reached # 4 in Israel, # 1 in Italy, # 38 in UK, and # 5 in US Billboard Dance Chart.

Also the album, with the same title, followed on the 18th of November 1997, containing 10 tracks. On one of the songs, called Summer Eclipse, she worked with the famous guitarist Tonino Baliardo of the Gypsy Kings.  With this album, a very original creation, Gala proved again to be always looking for new creative ways of interpreting her music. The video clips of Freed From Desire, Let A Boy Cry and Come Into My Life kept on being played on the music channels in Europe (MTV and M.C.M.).

The 5th single to be released was Suddenly : it was not as successful as the previous ones but did #2 in Israel and #4 in Italy anyway.

Gala writes herself the texts of her songs. Nowadays she lives in New York and feels good there. She is always dressed in black because it catches less the dirt, and she always wears pants because she finds it more practical. She feels the joy of living since she almost died of an allergy to antibiotics. She likes when it is calm but she needs to have always someone nearby (for example her best friend).

1998 : it is said that a Remixes CD album was released. Gala met Steve Fargnoli, Prince's manager who accepted to become her producer. She signed with Universal Records in Italy

2001 : after the sudden death of her producer, everything stopped for Gala. She was in conflict with Universal which would not let her do the music she wanted. So she eventually left, losing everything.

2000 : Gala is back with a remix of her first hit Everyone Has Inside. The remix was done by Eiffel 65.

2004 : during a broadcast on the French TV channel M6, about the biggest record sellers of all time, Gala was among the guests.

2005 : Freed From Desire was covered by a project called Starclub. Motivated by a web fan petition asking for her return (signed by almost 400 persons) and after almost 8 years of silence, Gala came back with a now single entitled Faraway, co-produced by Kevin Rudolf. Unfortunately for her fans, it was not eurodance but rather R'nb. It had some success in Israel and Greece, it entered the top 100 il France but never went further than #71.

2006 : Faraway was quite successful in Greece. She appeared on the 10th June, during the MegaPANN-Party at 22:30 at the Central Studios in Utrecht (Netherlands). Her next single is ready : it will be entitled I Like The Way You... Once again, it has nothing to do with eurodance.

In July, Molella released a single called From Space To My Life containing the chorus of Come Into My Life, sung by a new vocalist.

2007 : she released a digital album entitled Coming Into A Decade.

2008 : Gala founded her own label Matriarchy Records in Brooklyn. MLA in their single A Friend Of Joshua sampled Gala's Everyone Has Inside. In August, Gala finally released a new single entitled Tough Love. An album also entitled Tough Love was planned.

2009 : her single Faraway was covered by Greek artist Tamta under the title Ftais. She released digitally her new album Tough Love in September.

2010 : Gala should be back this year with a new single and a new album. The sound woud be pop rock and both are planned to be released at the same time.

2011 : she kept on performing on the stage of several 90s events ( MNM Party Zone ) and tours (Génération Dance Machine).

Listen to Gala on Radio Euro Classic, the eurodance radio