Home > Encyclopaedia > Me and My 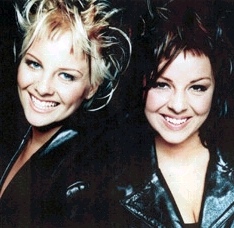 Latest Me and My news

02/03/2009 : Susanne Georgi from Me & My recorded a song entitled La Teva Decision (Get A Life) and competed to be selected to represent Andorra at Eurovision Song Contest

17/11/2008 : According to rumors, among the 648 songs competing for Dansk Melodi Grand Prix 2009 (the Danish selection to choose the song which will represent Denmark at ESC), one could have been written by Me & My, who already competed to represent Denmark in 2007.

Me and My albums

Me and My singles

Me and My biography

Records company : EMI-music. Me & My are two Danish sisters Susan and Pernille Georgi.

Before becoming Me & My, the duo were known as "SuPer Sisters" (the word "SuPer" being a compound of the two singers' forenames). Towards the beginning of the 1990s they released two Danish-language albums and tried to enter the 1991 Eurovision Song Contest, but unfortunately Pernille - being 15 at the time - was too young to enter. The song which they were supposed to sing, eventually finished 2nd in the Danish national final.

Their first hit single as Me & My was Dub-I-Dub which led them to success (#1 in Denmark, #2 in Sweden, #8 in Israel). It was produced by Dean 'N and Johnny Jam. It was followed by with three other singles off their debut album Me & My : Baby Boy, Lion Eddie, and Waiting (which included some previously unreleased versions of Lion Eddie, Dub-I-Dub and Baby Boy) and Touch Of Your Love which was only released in Japan.

Sisters wrote most of their material and each song was an instant hit. The album represented an entirely new style of Danish pop music and, as a result, Me & My's sales figures reached almost explosive heights around the world during 1996. Just to give an example, the Georgi sisters sold 1.5 million albums and 750,000 singles in Japan in only one year. "Our number Dub I Dub opened doors, not only for us but also for a lot of other Danish bands", says Pernille. "Everything happened so fast with the first record, that it was really difficult for us to realise what was happening. On the other hand, it gave us a name, a style and a foundation to build upon". In the spring of 1997 they were presented with two Gold Disc Awards for the year's best-selling international album and as best-selling foreign artists in Japan.

Their second album Let The Love Go On deserved the same success. The singles released off of it were Loving You, So Many Men, Every Single Day and Let The Love Go On (which went # 13 in Israel). They also collaborated with various Danish artists on a single for charity in Denmark Selv En Drabe some of the other artists included Tiggy, Aqua, Daze, Cartoons and many others.

Me & My released their third album Flying High in February 2001. Fly High was the first album so far, where Me & My have had full control of the recording process. "Actually, it was a bit like the film Thelma and Louise. We packed the car in Andorra and drove all the way to Germany, where we stayed with our producers Thomas Nöhre and Oliver Hintz", they say.

With Me & My's previous recordings, everything was planned down to the last detail, but this time the process was quite different. "Just the fact that we lived at our producers' place gave us a totally different and much more intense attitude to the work on the album. We didn't have to fly backwards and forwards between studios and different hotels and nobody bossed us around or expected too much of us", continues Pernille. "All this meant that we had enough peace and quiet to be able to take our time and play around with the music".

And this "playing around with the music" is very clear on the new album. Me & My know what they are capable of as well as what they want, so every single number has been chosen to meet strict quality criteria. The different working methods this time gave the sisters the chance to polish up the songs until they sounded as good they possibly could, and this can be heard on the new album. "The numbers on this album had to be certain hits. That was our minimum requirement", says Pernille. "People should be able to listen to the entire album right through. There's enough happy pop music, dance and trance on it to send people off on a musical trip", adds Susanne.

On Fly High, Me & My moved into new genres such as dance and trance. The music was more club-oriented than before, although the album also contained some of the catchy popular hits that the earlier records were so well-known for. "We wanted to show other sides of ourselves, not just the ones that everyone already knows. We have a lot more to offer besides Dub I Duband Let The Love Go On and we felt like being a bit more daring and forthright in the way we expressed ourselves this time", laughs Pernille.

The title number, Fly High once again puts Me & My back on the dance floor as well as at the top of the hit lists. On a number like La La Superstar, Me & My show some nice self-irony as they sing about all the dreams of stardom. When you finally become a star, things turn out to be not quite so glamorous as you expected. The album also features a cover version of D.A.D.'s Sleeping My Day Away in a new dance interpretation that is just bursting with energy. Me & My wrote songs about love and all its consequences. This is a record about life, about having the courage to believe in yourself and in your own ability. It's about keeping an open mind, welcoming new experiences and enjoying sensations, also when you are exposed to the less pleasant sides of life now and again.

The first single Flying high jumped at rank # 1 in air play chart at Radio Jerusalem and it went number 3 on the Danish sales list. November 22nd they performed at the "Scandinavian DJ Convention" in Malmø. Sunday 4th of February 2001 they performed at the 2 year birthday of the Danish radio station "The Voice" in Aarhus. Meanwhile they a gold single for 5.000 sold units of Fly High.

The follow-up was a cover song : Sleeping My Days Away. There was a lot of reactions from the DAD-fans in Denmark, since it's an old rock-song. They had a hard time accepting a new pop version of the smash hit.

April 2002 : Me & My and the danish female-artist Nicole have secretly recorded a brand-new latino/dance-track together : Te Quiero. The 3 girls performed together for the very first time on the 20th of April in KB Hallen, Copenhagen. They are also busy with the making of their new album, and their apperance with Nicole comes as a good surprise for those fans who are waiting for the new album.

2003 : the sisters started working on their new album.

2004 : Susanne started a solo carreer, she plans to move to the USA to record her first album. Her sister Pernille got married with Christopher James and just gave birth to a baby. The fourth Me & My album was almost finished but was postponed...

2006 : in a program about Danish dancemusic broadcasted in May on national TV, Me & My said in an interview that they were still working on a new album. No plans for the release, so it could still take some time.

Me & My competed in the Danish Eurovision 2007 contest, to be selected to represent Denmark in the international event. They performed with the new song Two Are Stronger Than One but were finally not selected.

2007 : in March, Me & My released a best of album entitled The Ultimate Collection. For the 2007 Eurovision Song Contest, Susanne Georgi will be announcing the Danish points.

They'll go in studio to record new material for an upcoming album. This new album was planned for the beginning of 2008, but nothing came out so far...

2015 : Dean 'N the producer behind Me & My's breakthrough in 1994, passed away on May 16th at the age of 46 following complications from multiple sclerosis

Roberto Campos - Canadian Eurodance
Dance Artists Infos
Me & My Official Website
Thanks to Shimon O'Hana for the charts positions
Thanks to Anders Bøgh, Morten and Tyler for the latest news

Me and My biography was last updated Sun, January 22nd 2017


Links to Me and My

Complete your Me and My collection

Search for Me and My items at
Momox
eBay
PriceMinister
MusicStack
Juno Records
Amazon.fr


More about Me and My

Listen to Me and My on Radio Euro Classic, the eurodance radio