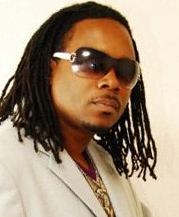 Songwriter, rapper, producer and vocalist Dwight Anthony Hayden aka MC Dilly was born in Jamaica, close to Port Antonio, one of the main tourist area. He got interested in music at a very early age : he did his first appearance at a local stage show as he was only 9. Some years later, be moved to Bronx (New York), where he hooked up with reggae dancehall sound, building his American fan base. After graduating Truman High School, he did not have any money for college. So he joined the US Army, which brought him to Germany.

There, he continued his musical carreer by collaborating with Sahara music and Intercord records, out of Fulda and Stuttgart. He learned how to perform and record professionally. He also picked up on producing, arranging, mixing and song writing. This is how Dwight became ragga-rapper for the project 2 For Love, his first major project. With ex hair model Jacky, they released two singles and toured all over Germany, performing with some of Europe's big names such as La Bouche, DJ Bobo, Reel 2 Real. and C-block. He also contributed to Matchboxx Love Peace And Harmony.

Then, Dwight went back to America to build his recording company and label UNT Records in the Midwest. He released 2 compilations under that label : Mercenaries and Colabo. In spite of many attempts, he did not got the expected success, so finally Dwight went back to Europe, this time Italy. He met DJ Lele Finetto who let him freestyle in the clubs in Vicenza, gaining popularity among a military community. Then he started collaborating with DJ Tony Prince who wanted him as a vocalist. He worked in Venice, Milan, Florence, Rome, Bologna, Treviso, Verona, Rimini and Naples, and also visited neighboring countries (Slovania, Switzerland, Austria, Hungary and Spain).

2004 : he contributed to Ottomix's single Raggasex and to PLM's The Big Casino "Hoes" (with vocals by Reuben Ehigie, production by Lele Finetto and Ottomix). He started touring Europe and Asia. He also went to Afghanistan and Iraq with MWR and AKA Productions for the US military intertaining soldiers and family members across the globe.

2005 : he released his solo album Da Don under UNT Productions. He describes the style as dancehall reggae with a Hip Hop twist. He also released two singles (Run, Bounce) from the album.