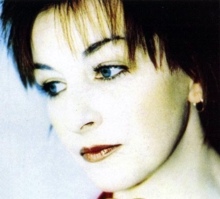 02/11/2020 : Ann Lee aka dance diva Annerley Gordon was featured on Pochill's new album, on the first track A Long Way to Go.

05/08/2020 : 2 Euro Mixes by Ken Stewart were done for Ann Lee's Ring My Bell and they really sound classic eurodance

17/11/2010 : Offlimits announced a new Pochill album with at least 1 song featuring vocals by Ann Lee called Sound of the Sea. (Thanks to Tavi Meran)

28/11/2009 : Ann Lee's new single 2 People is available. She was also featured on Favretto's new single I Get The Feeling, which should be out on December 11th as digital release (Thanks to Dance Music News)

08/04/2009 : Ann Lee is working on new material with her producer Benny Benassi. The first single will be released in the summer (thanks to eurodance blog)

Behind Ann Lee stands the English euro vocalist Annerly Gordon who took part to a huge number of eurodance projects. That's how she was contacted by A. Larry Pignagnoli, with whom she had alredy worked on the Whigfield project, among others. He had been working on a track with Marco Soncini they called Two Times. Her rendition (with the help of the computer) blew him away. She had arrived. Two Times was one of the most outstanding debut songs of the dance scene. It was a hit all over Europe and more, reaching #4 in Israel, and #2 in UK. It made a huge impression on the dance charts in Belgium, Sweden, Holland, England and Austria. But it has truly made magic in Germany, France, and Denmark where it went gold.

The three kept on collaborating on new material. More hits followed : Voices, a chartbuster as well (#27 in UK). It was written and composed by Annerly Gordon, M. Soncini and P. Sears. The CD included a remix by Masterboy. Both singles could be found on the debut album, Dreams. The rest of the tracks were sure to please...

Ann Lee began her trek across America in Chicago on WKIE Energy 92.7 Other stations were sure to follow. American musical reviews titled : "Stand back, the girl with the "Midas Touch" is coming to America"...

2009 : in an interview, ann Lee revealed that she was working on a song entitled 2 People.

2010 : Ann Lee was featured on Pochill's song Sound Of The Sea on album Discipline