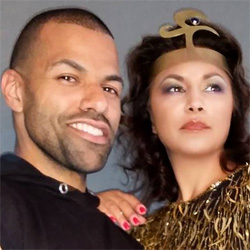 18/04/2016 : Current Pharao rapper Prince Damien is competing in Deutschland Sucht den Superstar and he is in the top 10.

06/09/2014 : Kyra finally introduced her new partner in project Pharao : a young rapper known under the stage name the Prince of Dance. See photo.

29/07/2014 : Pharao will return this autumn live on stage. Yesterday, Kyra did a photoshoot for the project. More infos (thanks to BK Duke).

German eurodance act Pharao's history began in the end of 1993, when young producer duo, Alexander Hawking and DJ Stevie Steve (Steffen Harning), who both taken a great interest in the ancient East and Egypt in particular, decided to create a project around this theme.

Their debut single, I Show You Secrets, rocketed them to the top of the German Charts within weeks. This sensational success on the disco scene took them to Number One in every Dance Chart around, earning them the title of 'Gods Of The Dance Temple' along the way. European sales were so good that they made the Top Ten in several other countries and Top Twenty in Music & Media's Eurochart too.

The charismatic duo comprising of exotic singer Kyra Pharao, and American rapper Deon Blue, received a Gold Award to mark the phenomenal sales of their first hit. The singles There Is A Star and World of Magic also became huge successes.

Pharao was the only eurodance project to feature animals. 'Petit', a 3 meter long python, was said to be Kyra's pet. She later revealed that it actually belonged to a breeder. According to the first album booklet, th team included another python called Masiah (or Masai) and he was owned by Deon...

The same year, Pharao did a remix for Cabballero's hit Hymn. The track was released on Cabballero's remix maxi-single (Hymn - Sphinx Remix)

In November 1994, Pharao's debut album, simply entitled Pharao was released. This superb album contained 13 mysterious hits, for which the 'Gods Of The Dance Temple' seemed to have pulled every register. Each track was a combination of relentless groove and irresistible melody, and the result was a truly great modern dance album. Much of the credit went to Alexander Hawking and DJ Stevie Steve, who spent the best part of three months entombed in the crypts of their pharaonic studios before finally emerging with a definitive work. Album reached #23 on the German album chart.

1995 : Deon argued a lot with Kyra, escaped several times without warning, even did a live gig alone in a small discotheque in Essen ! He finally left the group for good to be replaced by Eric Martin. Born in Cardiff, Wales, Eric had Egyptians among his ancestors. 1,88 m tall, he lived in New York and was already a big name in US rap scene. He learned the new songs of the group in only 3 days, which amazed Kyra a lot.

1997 : Finally after almost two years of silence Pharao came back with a new single called Temple of Love, a great track in real Pharao style. The producers team remained the same, with Kyra alone as vocalist and without rapper. Last but not least, the snake 'Petit' was back too. On December 1st, 1997 the single Once Upon a Time was released : it was an europop song with superb vocals by Kyra.

1998 : Finally after more than 3 years since the first album was released the second album The Return was released in January 1998. It contained 14 new songs and it was a mix of europop and the already well known Pharao style. Pharao's fans will maybe miss Deon's rap... Since then, nothing has been released anymore. All that we knew about Pharao is that their are no longer under contract with Sony. Steffen Harning concentrated on his new project Milk & Sugar.

2003 : Pharao's hit There Is A Star was covered by the trance project Mysterio.

2014 : Pharao returned this autumn live on stage. Kyra is back, along with a new partner, a young rapper known under the stage name Prince Damien. The new producer behind Pharao was Chris Sauer aka BK Duke.

2016 : while Prince Damien was busy as DSDS candidate, Kyra official posted new Pharao pictures showing the face of the new rapper, Nik Felice aka Siam. Chris Sauer aka BK Duke is also collaborating with the group in studio

Listen to Pharao on Radio Euro Classic, the eurodance radio