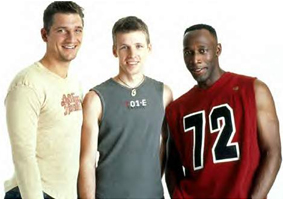 24/01/2020 : He co-wrote the lyrics of Daddy DJ's Over You, did remixes for Black Box : DJ Esteban releases his new single Pire ? (means worse ? in French) under DMN Records. Videoclip was shot in Utrecht, Saint Malo and Saint Barthélémy and directed by Patrick Sultan & Fabien Scarlakens.

13/02/2015 : On February 23rd Daddy DJ will release a deluxe version of their 2013 album Folder. Strangely, tracklisting does not include the remix of Daddy DJ that was supposed to have been selected after last December's remix contest...

13/12/2012 : Daddy DJ's first single from their new album /Folder will be entitled Crying. They organize a remix contest for this track. More infos on their Facebook page.

31/03/2010 : Daddy DJ's new single Perfect day is out now radio and club promotion and will be soon available on iTunes.

03/11/2009 : Daddy DJ are back ! Their new single Everyday was released as promo. You can discover it on their Myspace.

David, the vocalist, was born in New Caledonia. After 13 years of classical and jazz piano, he went wild over electronic music. He left Nouméa and came to Paris at the age of 21, after a year of work on productions and remixes of South Pacific artists, and entered the ESRA, a sound engineer school in Paris. As for Jean-Christophe, the keyboardist, he is native from Calais. He discovered electronic music and bought his first synth at the age of 15, after many years of classical piano lessons. After an experience in recording studios, he started in production and remixed (Gigi d'Agostino, Blondie, Dead or Alive, ...), and began to work as a teacher at the ESRA, where he met David. The teacher and the pupil decided to start working together : they listened to each other's productions and finally composed their first track in common in one night. Charly, the DJ and third member of the project, was born in Martinique. He started hosting a radio show on his school local radio at the age of 14, that's how he had his first contact with turntables as a DJ. His first influences were soul, funk and rap. At the beginning of the 90's, the discovery of techno pushed him to released a EP (Black Power EP) under the independent label RadiKal Groov Records. Thereafter, he remixed a single from Gigi d'Agostino for France. The team has also remixed XX's Give It Up, Edsilia's The Second Floor.(under the name of J&B), Blondie, Tom Jones...

Their first single Daddy DJ, released in December 2000, was a huge hit in France. It remained # 2 in the charts for 6 months. 1 million CDs were sold in France. The videoclip is a cartoon that tells the story of a little boy that would like to mix in the parties just like his daddy. On stage, David sings, Jean-Christophe plays the keyboards and Charly mixes. They gave their first show at the Zénith in Paris for the Halloween Techno Party and then took part to the Trophées de la nuit at the Lido (Paris), then they started a tour through France from disco to disco.

2001 : The next single to be released was entitled The Girl In Red, with 9 different mixes. Then came their first album Let Your Body Talk and thrid single Over You, co-written with Fabien Scarlakens aka DJ Esteban. They remixed Sarina Paris' track Look At Us.

2002 : After two years of intensive touring, the band decided to take a break, and each member went on his own projects.

2007 : the melody of Daddy DJ was covered by Basshunter in his latest single Sitter I Ventrilo Och Spelar Dota (later translated in english under the title All I Ever Wanted)

2008 : Daddy DJ were back, without Charly Merkiled who had left the project. They were working on tracks for their future album Rock Machine.

2009 : their hit Daddy DJ was covered by Crazy Frog. In May, Daddy DJ released the track Everyday as radio promo.

2012 : fans had to wait 2 more years to see the release of Daddy DJ's second studio album /Folder as well as the song Crying as single.

2014 : they released the single Free Your Mind.