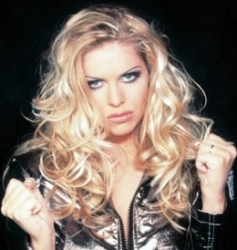 21/07/2016 : A 2k16 remixes packages for the Jockeyboys featuring Nance Higher will be out under Dmn Records on August 24th. (Thanks to Krasi)

30/08/2013 : Soon, the JockeyBoys feat Nance will release a remixes package of their current single Higher under DMN records Among them, a remix by Australian DJ Bafana Mac (Thanks to Krasi)

29/06/2013 : Nance was featured on the JockeyBoys' new single Higher (thanks to Maarten Steendam)

Nancy Anna Francina Coolen was born 10th September 1973 in Asten. Almost from the minute she could walk, she has been busy with singing and dancing. And at the age of 4 Nance joined the local ballet, called the Dinky Dancers. The first two years she danced classic ballet but from the age of 6 she preformed pop-ballet, becoming the 'Miss Dinky Dancer 1984'. At the age of 14 she stroke her audience with a performance in a fashion show.

Only 15 years old, Nance was discovered in a disco, a local DJ introduced her to Ruud Van Rijen. And before she knew she stood next to Captain Hollywood and became one of the members of Twenty 4 Seven. They, together with Hanks & Jacks, were one of the first Eurodance-acts. After Capt. Hollywood left the band, things became very quiet around Nance. After a job in a supermarket producer Ruud van Reijen asked Nance, if she still would be a part of Twenty 4 Seven, Nance agreed, teaming with the new rapper Stay C.

The first year remained quiet for the reformed Twenty 4 Seven, but in 1993, they suddenly became popular all over the world again. Nance just reached the age of 20 when Slave To The Music entered the charts worldwide.

During the first months in 1995 things went wrong around Twenty 4 Seven. During this months everyone denied the argues, but they decided to be quiet for a while. In this time Nance looked beyond Twenty 4 Seven, she presented a TV-program on RTL 5 (a Dutch TV-channel) In this show, called 'Liefde is' (Love is ), a boy and girl were coupled by Love Is... strips. These boy & girl were chosen out of 200 Dutch youths, and Nance had to keep them under control. This program stopped after one season, even if the youths, the people this show was meant for, were positive about it

During one of the many photo-sessions, Nance met pop-photographer William Rutten. And on the 4th of May Nance & William got married.

Because Nance had a contract with Twenty 4 Seven till July 1996, things became very quiet around her : no new single, no new program, just silence. But many gossip magazins in Holland suddenly wrote about them. Between August 1995 and July 1996 no new material has been released, in many interviews she there would be some, but that didn't happen. The contract with Twenty 4 Seven didn't allow neither Stay-C nor Nance to release new singles.

But Nance didn't lay down. She started a solo carrer, beginning with Love Is in 1995, released under CNR-Music then ZYX the same year. It contained remixes by Martin Boer (from 2 Brothers on the 4th Floor, aka Dancability) and 2 bonus tracks : Shot Of Love and Beats Of Love. It was followed by the very energetic Big Brother Is Watching You and by Kiss It in 1996 (which contained 2 additional versions of Big Brother). An album was even released but it is very hard to find, one could even doubt it really existed (the reference is CD/MC 533 899-2/4).

Live Nance brought stunning shows, also under difficult circumstances. She did festivals together with All Saints, Five and the Backstreet Boys. Although the audience mainly exists of little girls Nance knew how to play them and becomes an absolute favorite. After that she did stadiums for a live audience of more the 60 000 people before the soccer match Chelsea - Feyenoord and performed on festivals like the well-known and extremely popular Beach Pop Festival.

Then came the single He's My Favourite DJ, produced by Cooly D (from Flip Da Scrip). She wrote the script of the video : the heroin of the clip falls in love with the DJ, sees that he is involved with other women and shoots him, ending herself in a mental hospital... Not politically correct enough for the TV channel TMF which censored the video.

Meanwhile, together with Twenty 4 Seven featuring Stella and Stay-C, they performed very much. Moreover on stage solo, she co-hosted some TV-shows.

One of the remixes of her last single Miss You was made by Sash! who also produced the record. Once again the video clip was remarkable. The censored version, the original being too explicit, went on high rotation on every major network and included besides Nance another well known actor, Ferry Somogyi.

Herman Brood, a Dutch singer, performed a song together with Nance and Des'ray from the 2 Brothers on the 4th floor. The three did Here There And Everywhere from the Beatles. This song could be seen on Dutch television at the end of November on La La La Live!

In the following period Nance decided to make a career move towards TV host. She hosted a popular show called Rappatongo some 200 times and became a regular face on prime time National TV. In the meantime Nance was involved in many One Of shows and major TV events and hosted a new game show called Lingo for National TV that was broadcasted on a daily prime time network. She also appeared Vet Heftig, and played the role of Linda in the episode #2.6 of Pittige tijden in 1997.

1999 : Nance released a single in Dutch with the singer Henk Westbroek on the 4th of January.

2005 : she was Dutch vote presenter at the Eurovision Song Contest. In September she presented the shows Shownieuws and Domino Day.

2006 : in August, together with Gerard Joling, she presented the show "Sterren Dansen Op Het IJs".

2007 : Nance is taking part to a campaign to raise founds for children suffering from chronic digestive disease. She herself suffers from Crohne disease.

Since March, she is one of the hosts of the new real-TV show So You Wanna Be A Popstar jury, with Gerard Joling.

2009 : in January, she gave birth to her first baby, Robin. Father is baron Pico van Sytzama. Still with Gerard Joling, she presented the second season of real-TV show "Popstars" on channel SBS6.

2010 : she presented the 3rd season of real-TV show "Popstars" as well as the TV game "Het Mooiste Pand van Nederland" on channel SBS6.

2011 : in October, Nance hosted the dogs show "Een Huis Vol Honden". She helped families to chose the perfect dog. She herself owns a chihuahua.

2012 : she left channel SBS6. In July, took part to real-TV show Ranking the Stars on BNN.

2013 : Nance underwent a surgery for a thoracic spinal disc herniation. In June, she was featured on the JockeyBoys' new single Higher

2016 : Nance still presents RTL Woonmagazine on RTL4. She performs from time to time with the Diva's of Dance (currently Des'ray and Ingrid Simons). In May, she took part to the charity collect "Lock me up - Free a girl" to help free girls forced into prostitution in India. In August, a 2k16 remixes packages for the Jockeyboys featuring Nance Higher was released.

Nance.nl
Thanks to Fred Oudoul for additionnal informations
Thanks to Ruud van Rijen himself

Listen to Nance on Radio Euro Classic, the eurodance radio