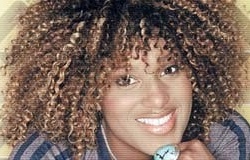 01/03/2019 : Daisy Dee wants to bring back ClubRotation, the German dance TV show which aired on late Viva TV. (Thanks to Tavi Meran)

20/09/2018 : Daisy Dee announced that she was back with Technotronic (Thanks to Tavi Meran)

13/08/2012 : Daisy Dee will soon start a new season of her fashion-advices series FashionTrix. Casting is open in Germany...

06/07/2009 : Daisy Dee is back on German TV station Viva. She presents a show about fashion entitled Fashion Trix (thanks to eurodance blog).

08/11/2008 : Daisy Dee recorded a new version of Playahitty's hit single The Summer Is Magic. The track is featured on the compilation Future Trance 44 (thanks to Tavi Meran)

Daisy Rollocks was born on September 4th 1970 in Curacao. She has a sister called Glen and a brother called June (well-known under stage name of Pappa Bear). She weights 70 kg and she is 1,78 m tall. She came to Holland at the age of 8. She used to live in a small village, Roermond, in The Netherlands, where she has a small  boutique with streetwear-clothes (but this information is not confirmed). Her main activity is singing, but she is also a songwriter, an actress, a fashion designer, a dancer and a TV presenter. She speaks Dutch (which is her mother language), but she is also fluent in English, German & Spanish.

After she had graduated from school, she wanted to start interior decoration studies. To pay her studies she worked in a discotheque which was very well-known for its live-concerts. One evening, a group which was performing quitted after the first song. While the assistance was complaining louder and louder, Daisy grabbed the microphone and gave an improvised sample of her skills. Her appearance impressed not only the public, but also some members of a records company which were there by chance. This is how everything began...

Daisy Dee's first singles received irregular success. Her first success was I Got U in 1992. Afterwards, her voice was featured by many dance projects : from MCB Crazy (written by Patrick de Meyer), Blackmale Yeah Yeah, Bit Machine Somebody Real with Karen Jones to U 96 Love Religion & Technotronic's last album with Ya Kid K and Black Diamond (again a collaboration with Patrick de Meyer).

Daisy tried several countries (USA, Italy, Holland, Belgium) before finding a real and deserved recognition in Germany. She took part to Magic Affair's single Energy Of Light. In 1996 Just Jump was the single that made everything go faster in her carreer : it was a European success, and she became one of the major selling artist of Edel Records Germany.

Daisy appeared in the TV-soap "Alle zusammen  Jeder für sich", playing the role of Charlotte Bonalì. The first episode was played on the German channel RTL II on November 25th 1996, the last one on October 30th 1997.

September 1996, Daisy became presenter of VIVA TV weekly Dance show Club Rotation. Her third album I Am Who I Am was ready but only released as promo.

She began to work on new material at the Booya Music Studios, run by her long-term companion, Toni Cottura. Their first product was the single, Hey You (Open Up Your Mind), come out on July 28th 1997. The video of Hey You (Open Up Your Mind) was shot in Gotenburg (Germany) on the 24/25 of June 1997 by Revolver Music Video. Planned were collaborations with Nana, The Free frontman Charles Simmons and Toni Cottura. She also contributed as co-producer to AK Swift's track In The Game.

Daisy married Toni Cottura on October 1997. In Spring 1998, Daisy appeared as a dancer in her brother Pappa Bear's video When The Rain Begins To Fall, a groovy cover of Jermaine Jackson's '80s single.

She also appeared in the soap Alle Zusammen on the German TV channel RTL2, together with the singer Oli P.

In 2000, she was back with a new solo single Love Is The Answer, produced by Mark'Oh, world famous eurotechno artist and DJ. She is also presenting "Club Rotation" and "Night Club" on VIVA TV. Afterwards was released the track Open Sesame, a cover of Leila K's hit. Still on Viva, she presented weekly the TV-programm "Ritmo".

2001 : she appeared as singer for the Lovestern Galaktika project single Are You Ready?.

2003 : she contributed to Starsplash's single Fly Away (Owner Of Your Heart). The TV-programm "Ritmo" that Daisy presented was stopped.

2004 : Daisy Dee opened her own club on the 6th of March : Da Club, located in Mühlheim a.d. Ruhr (Germany) and left the Club Rotation show, being replaced by Annemarie, then Nela.

2006 : Daisy entered the German channel 9Live. Apparently she remained there only one year since in 2007 she is not among the moderators' list anymore.

2008 : Daisy Dee recorded a new version of Playahitty's hit single The Summer Is Magic. The track is featured on the compilation Future Trance 44. In November, she presented the show "We Love The 90s" in Oberhausen.

2009 : Daisy Dee is back on German TV station Viva. She presents a show about fashion entitled Fashion Trix.