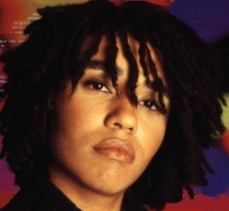 10/03/2019 : Next summer, Technotronic members Ya Kid K and MC Eric will release a collaboration entitled I Like To

05/06/2017 : Ya Kid K recorded raps in French for a Tyree Drums song entitled Devancer. (Thanks to Tavi Meran)

28/12/2014 : New from Ya Kid K, single Auto-Erotic, a collaboration with We3Kings, and an album, Stalled Constructions.

01/08/2014 : Ya Kid K recently released a new song entitled Can't Suffer Love. It was originally written by Manuela Kamosi herself in 1996, composed by Manuela Kamosi, Walter Brandt and Bill Brandt.

02/12/2011 : Ya Kid K released last August a new solo digital single entitled Do U C Me Standing (Thanks to Tavi Meran)

16/03/2009 : Syndicate of Law featured Ya kid K, former Technotronic rapper, on their new single Citizen Of The Planet. Discover it here. (thanks to eurodance blog)

She had moved to Belgium when she was 11 years old, then Chicago, Illinois, USA, where she was introduced to rap and deep house music. Her sister, Karoline 'Leki' Kamosi, is an R&B singer. On her return to Belgium she became member of the rap group Fresh Beat Productions then teamed up with Jo Bogaert. She became the female rapper of his group Technotronic and can be heard on many of their greatest hits. She contributed to the first hit Pump Up The Jam (though her contribution was uncredited). She then appeared alongside professional and personal partner MC Eric on the breakthrough hit, This Beat Is Technotronic, which is considered by many to be the first hip house record. They teamed up again with Technotronic for Get Up! (Before The Night Is Over), which was another major international hit.

Afterwards Manuela was featured by the project Hi Tek in 1990 for the single Spin That Wheel. She also released some singles solo such as the track Awesome (for the Teenage Mutant Ninja Turtles II soundtrack) under SBK Records, and one album entitled One World Nation. The birth of a child then interrupted her plans. Her projected solo career seems to have petered out since that time.

Ya Kid K's Come Back Home was used as the music on the credit trailer of the film The Night We Never Met (1993, Matthew Broderick).

She came back with Technotronic for the release of the album Recall in 1995, with Black Diamond and Daisy Dee . Her voice appeared on the singles Move It To The Rhythm and Recall.

In 1996 Ya Kid K took part to several tracks on the solo album Robi Rob's Clubworld that Robert Clivilles' (one of the C of C+C Music Factory) released. Among them : Shake That Body and Make That Money.

1997 : Ya Kid K provided vocals for the 2 Skinnee J's cover of Pump Up the Jam entitled, BBQ. She sang "Pump up the gas grill," as the chorus.

In 2001, she released a track called Take A Trip (Semini Records). She also did a guest rap on Life Transmission, the 2001 album from Belgian avant-rockers DAAU.

In October 2005, Ya Kid K made a guest appearance on Public Warning the debut album of Lady Sovereign. Ya Kid K appears on the track Those Were the Days and can be clearly heard growling at the opening of the song.

2002, she released single Take A Trip on Semini Records.

2009 : Syndicate of Law featured Ya Kid K on their new single Citizen Of The Planet

2011 : she released in August a new solo digital single entitled Do U C Me Standing. She was also featured on Baronic Arts, Comes Love.

Yahoo Music
Getmusic
Thanks to Nico
Thanks to Frederick & Jeannette Hawkins


Links to Ya Kid K

Complete your Ya Kid K collection


More about Ya Kid K

Listen to Ya Kid K on Radio Euro Classic, the eurodance radio