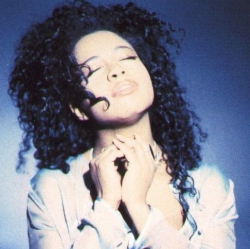 Her real name is Regana (or Réjane) Magloire. She is the daughter of a Haitian father and a Polish mother. Magloire was born in Zaire, but grew up in New York. Reggie's musical carreer started very early early. The first time she sang with the Metropolitan Opera of New-York, she was only 13 years old. Having taken singing and dancing lessons from the tender age of 9 with Seth Riggs (singing coach of Michael Jackson) and Phil Black's school of Dance, she was already working as an actress and mode. During the Seventies, she appeared in about 200 episodes of the children TV series The Electric Company with talents such as Bill Cosby and Morgan Freeman (her father in the series). She played roles in theatrical films (such as The Story of Wilma Rudolph) and did many appearances for national US commercials.

Succeeding in all the castings she was presented to, Reggie was noticed during her concert with the MET by Reggie Thompson who proposed her to record for him. That song was Last Night A DJ Saved My Life and became within 8 weeks a #1 hit all over the world. This song is still considered as an anthem of the disco music and sold 9 million copies. It was covered by many projects, from It Takes Two to Mariah Carey. This huge success embarked Reggie Magloire to Europe and Asia for tours.

Afterwards, she recorded the first album of the group Indeep. She decided to settle down in Brussels (Belgium) and went back and forth between the US, giving concerts with Stevie Wonder and Toots Thielemans.

In 1990, she did backing vocals on Jacques Duvall's album Je Déçois... and on Arno's first album Ratata. She was featured by Hithouse (on I've Been Waiting For Your Love and I Want You 2 Move).

She joined Technotronic as singer and songwriter for the songs Move that Body, Work and Money Makes The World Go Round. For this participation, she received a Musical Award at Monaco (best female dance singer), awards from SABAM (Belgian society of authors) as best author of the year. She also was featured by the band Hot for the single Darling Child and by Alain Chamfort and Starflam.

2005 : Reggie released the solo album Forbidden Opera, a crossover between opera and hip-hop.

Listen to Reggie on Radio Euro Classic, the eurodance radio