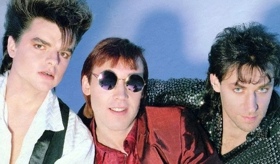 The Silent Circle trio has been existing since 1976. The keyboardist and composer Axel Breitung, who would later become one of the kings of Eurodance, and the vocalist Jo Jo Tyson won the first prize at the Newcomers Festival. But though their first experience was so promising, their ways divorced : Axel and drummer CC Behrens stopped their performances. Then all three of them lost each other from their sight. In their mid 20s they met again and decided it was time for their common band to rise from the ashes. Silent Circle was born. Their first single Hide Away - Man Is Comin' ! impressed the watchers of Show & Co. mit Carlo. It was followed by the whole bunch of yet more successful hits : Touch in the Night (presented at the popular TV show Formel Eins), Stop The Rain In The Night, Love Is Just A Word and Time For Love ! Meanwhile the whole album No.1 was released under the Blow Up label of Intercord company. It included 11 songs, six people contributed to their composition, and the album came out perfect - no song was like any other, still they all had that specific mood which distinguished Silent Circle from all other bands of the 80s. Harald Shaefer replaced Axel Breitung during the public appearances, while the band's founder and head devoted himself totally to writing and producing new songs. Silent Circle re-recorded once again Love Is Just A Word, with an new rhythm and a totally new guitar sound. In total 7 songs from the first album were released on 7' and 12' singles in different versions.

After this incredibly fruitful first year Silent Circle slowed down their hit conveyer gradually to everybody's regret. Bernd Dietrich and Engelbert Simons wrote two more songs for them in 1987. They were released already on Teldec singles, but this new contract did not result in any album. The hope for return of Silent Circle appeared in 1989 when two more singles with four new songs were released by Coconut. Among them was I Am Your Believer (also included in Bad Boys Blue's album Game Of Love). What A Shame remained the last song by Silent Circle during the next four years...

The long awaited comeback took place in May of 1993 when a young recording company from Dresden, Fun Music Promotion, re-released on CD four versions of their most succesful hit Touch In The Night, 8 years after this song had entered various charts for several months. It was followed by the Hit-Mix 93 (Touch In The Night / Stop The Rain In The Night / Moonlight Affair / Touch In The Night) which was performed in TV program Stop & Go. The Best of Silent Circle - Volume II also appeared in May, its contents was almost identical to No.1 . There were a hit-mix and an instrumental version of Hide Away added, plus four songs which were given in alternative versions.

Shortly after that Axel and Martin composed the first new Silent Circle song in five years - 2night. Four remixes were published on CD-single, and one more version appeared on the next album Back! It had definitely a different sound compared to No.1 since it forwarned the future trends of Eurodance music.

Since 1994 we did not see more than one CD-single release every year, with songs from the last album - Every Move, Every Touch (original in 1994 and remixed in 1995), the promotional only Egyptian Eyes, Take The Chance and Desire in 1996.

In 1997, the album Back II was released. At this time, the group still featured Axel Breitung on keyboards, CC Behrens on drums and Martin Tychsen on vocals. The album was produced and written by Axel Breitung & Martin Tychsen for Dusty Records. It was published by Bishop Songs (Axel's records company), recorded and mixed by Bishop Audio Studio in Northeim (Germany). Additional vocals were done by Sandra Sauter (on Tonight), Christiane Lupp (on Every Move Every Touch), Messoda Yahoudi on (Egyptian Eyes). It was compiled by Andreas Weihs.

Thanks to Necronomic and Ivo Ivanov