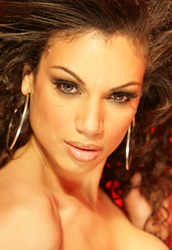 01/11/2020 : Natascha Wright released a book entitled Express your uniqueness, in which she unveils memories and photos, and gives tips to new artists

24/06/2019 : Next June 27th in the Westin Grand Frankfurt Hotel (Francfort, Germany), Natascha Wright will pay a tribute to Diana Ross during a one night only show

20/04/2019 : Discover the videoclip for Natascha Wright's cover version of La Bouche's Be My Lover that she shot last year in Birdcage in the city of Taunusstein. Videoclip was directed by Ulrich H.M.Wolf and produced by Pure Vision Entertainment

11/06/2018 : Last week, Natascha Wright shot the videoclip for her forthcoming single Be My Lover.

Natascha Wright aka Natascha Rekelhoff was born on July 18th 1975 in Billinton, a small village in Surinam, South-America. Her Mum is South-America, her father is Dutch. She has one sister called Bianca. She describes herself as temperamentful, sensitive, motivated, ambitious and organised. She is also a very spiritual person. Her favourite artists are Betty Wright, Randy Crawford, Diana Ross and Anita Baker. She also loves Madonna, Jennifer Lopez and Janet Jackson for their business sense and sex appeal. Her favourite music are Soul, Rhythm & Blues, Jazz and Pop.

She knew at an early age what she wanted to do in her life. She wanted to be a singer and started to take her talent outside the school walls by participating in talent searches and various competitions. At the age of 12 she won the first prize in such a talent competition. At the age of 17 she sung in Dutch, Belgian and German discos. At the age of 18 Natascha Wright went to the "Academy for light Music" (AVLM) in Hilversum Holland, where she followed an intensive music training to improve her skills.

During one of the talent competitions, there was a famous Dutch producer, Hans van Hemert. He invited Natascha into his studio to sing one of his demo's. The name of the song was Selfcontrol. It was a nice dance song in the style of Kylie Minogue. Recorded at Wisselrood, it was produced by Hans van Hemert, arranged by Paul Natte, released by Polydor Holland. Selfcontrol had a lot of airplay, and the video was played daily on the English music channel, Sky Channel.

In 1993 Haddaway, who was riding high on What Is Love, (the number 1 hit at the time) asked Natascha Wright to contribute her vocal styling, as a support singer during his world tour. Her strong charisma and warm soprano voice gave Haddaway's show the perfect extras for his Live World Tour. For three years they travelled all over the world, appearing on many stages such as Dance Machine in France. "My time singing for Haddaway was one of the greatest in my career" she remembers.

In 1994, her single Party Of One became #1 in Canada. The follow-up Lovely Lie was produced by Steven Levis ans Steve Hill, written by Kim Sanders and Nosie Katzmann, recorded with the collaboration of J.D. Wood, and released under Polydor. The following singles were written and produced by Ferry and Garnefski. Watcha Gonna Do contains a B-side entitled Perfect Body Twisted Mind. The rapper Uncle X took part to this single. Phaedrus and the rapper Papadan were featured on the single Wake Me.

In 1995, her single Say You Think Of Me was written by Kim Sanders, Steven Levis and Nosie Katzmann.

Natascha was also featured by the project JAM : she sung the song What's The Way To Your Heart as a special guest of DJ Bobo's World In Motion tour in 1996. The single was released with a Bass Bumpers remix under the EAMS/Metrovinyl label.

In 1997, another single entitled Thinking About You was released as JAM. Then Natascha Wright travelled to California USA, to sing in MC Hammer's Gospel choir, and simultaneously worked together with several producers to develop her singing and song writing skills.

2000 : She replaced Melanie Thornton as frontwoman for the project La Bouche. "I hope to be a successful recording artist working as a singer for the rest of my life. I would like to have a world-wide success, and I would like to write and produce my own music, with my writing partner Muriel, we would like to continue co-operating with other good producers,of our own choice, who we admire, famous or not that doesn't matter" she says.

In parallel she followed her "secret hobby" : Barmusic, Easy Listening, Jazz- and Soul together with german Jazz- & Pop-Pianist Joe Völker from annheim. She dreamt of a solo-carrer but the dozens of records company she visited kept on telling her : "Wonderful voice. Super look. Unfortunately we already have the same style of singer here".

2004 : her voice was featured by Nik P (Nikolaus Presnik) for the single Lovin You, released at the end of the year in Austria. The song is a ballad. Then Natascha released her first solo album Free To Live It, a mix of pop, soul and rockbeat songs... Her mum Muriel wrote some of the texts. It was produced by Mary & Christopher Applegate and the Noizmakers.

2005 : she appeared in a book written by the journalist Thorben Leo and the photograph Angelika Zinzow, entitled Caféklatsch .in December 2005 she did a duet with Udo Jürgens in Zürich.

2006 : in March, she appeared on the Lounge Plaisir scene in Hannover. From 19th October to 7th, she toured with Udo Jürgens on his "Jetzt oder Nie! - Tour 2006". Even if she does not seem to be a part of La Bouche anymore, she is still in touch with Frank Farian, whe regularly asks her her for background vocals.

2007 : in June, Natascha Wright was working on her pop/jazz album. Release was planned for the end of August or beginning of September 2007.

Natascha is also a member of the band American Divas, with vocalists such as Pamela O'Neal, Theresa Burnette and Vanda G.

2009 : Natascha goes on tour with Udo Jürgens and the Pepe Lienhardt Orchestra. The tour started on 16th January in Heilbronn. She also started recording a duet album with Alfred McCrary

2012 : her duet album with Alfred McCrary was finally released in May. It was entitled Zacapa Soul, Vol. 1.

2014 : during a special 90s edition of ZDF Fernsehgarten, she performed her version of La Bouche's Be My Lover together with Joe Thompson from euro-rap project Down Low.