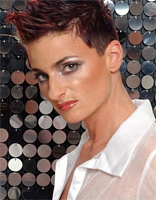 17/11/2017 : Last September, Franca Morgano did vocals on Stefan Rio's cover of Quincy Jones' Ai No Corrida. A remixes package has just been released

15/12/2012 : Franca Morgano gathered the christmas songs she recorded in an album entitled Christmas Songs Part 1 (so we guess there are more to come in the future...) (Thanks to Krasi)

Franca was born on 4th of January in Frankfurt am Main (Germany). Her family come from the South of Italy and her education was very strict. She has one sister and one brother. She learned to play the guitar by herself, at the age of 11. When she was only 13 she started writing her first songs. She won many 1st and 2nd places in various musical competitions (Rudi Carrell Show in 1991, Berliner Funkausstellung in 1991...). She did background vocals for Mariah Carey, did a tour with the Frankfurter Symphonie-Orchester and took part to many musical groups before being noticed by Mike Staab. This is how she became female vocalist of Magic Affair.

Her voice was recorded separately from AK's voice. She only met her future partner when the first video was shot. She found out he was very handsome... But afterwards she admitted she could hardly bear his macho temper.

She gave her voice to Magic Affair's first (and most succesful album). She won the Echo Award for the Best Dance Act Of The Year in München in 1994 and 1995 and was nominated for the MTV-Award in Berlin in 1995.

In 1994 too, Franca gave her voice to the project The Musketeers for the single All For Love. She also did vocals on Trance-Mission Save Me and on LIO You Drive Me Crazy. When one listen to Tuttifrutti's single Firewalker, one could wonder if Franca is not the vocalist...

She was fired from Magic Affair in February 1995 after the first album. Then Franca and her former partner AK Swift did a cover of the Chic song Good Times under the name of Blaxone. After that Franca Morgana went solo under the name of Voice. She released 3 singles, Dance With Me (a very cool eurodance song), I Can Reach Nobody, and a cover of the Queen hit Scandal. She was also featured by the techno project Lust for a single : Planet Paradise'96 , by Tory Kay for the track I Wanna Fly (of which she wrote the lyrics), by Gate for the single Interlace. She has released 2 singles under her name : One Way Street and Here I Am.

Then she started collaborating with Ryan Paris. Her voice appeared on the songs It's My Life (in 1998), Babe, I Wanna Love You Once Again (in 2000)...

Franca is not only a singer, but also a composer and a producer. She presented some TV-broadcasts. She did some TV-commercials (for the Shamtu Shampoo, the Cafe Lorenzo, CenterPark, Maggi, VDEW Sarah Lee and Lufthansa). Recently she created the project Franca and the Funky Grooves, together with the singer Ilka and the guitarist Bobby Stöcker. She took part to groups such as Spirit Of Soul and Sexy Motha Funky. She collaborated with Ralf Olbrich, Bobby, Giorgio Rozario and Mini, der Teufelsgeiger. She also started her own company MM Entertainment, specialized into radio jingles creation. She is also a song teacher.

Franca likes Indian cooking, shopping. Her favourite artist is Jack Nicholson. She likes dressing in white and in beige.

2003 : Franca joined Magic Affair again for the single Fly Away (La Serinissima). She also contributed to Hypertraxx single Promiseland (a trance track in a style reminding Brooklyn Bounce and Benassi), appearing in the video and on stage.

She also did some tours, alone or with her band, singing covers and original soul and pop American and Italian songs such as Quando, Volare, No No No, O Sole Mio, Azzurro, Viva La Mamma, A far L'Amore, E Cosi, Nell'Aria, Somebody Else's Guy...

2005 : in March, Franca Morgano, along with Nina Gerhard and other artists, recorded a charity single entitled Hope as United Allstars. The benefits will go to a village in Sri Lanka, hit hard by the tsunami three months ago.

2006 : Franca recorded the track Remember Me 2006, produced by Frank Winkelmann (Experience Of Music) and Dietmar Barzen. The track was to Music Street Singapore, an independent major-label. A compilation release is planned in that territory around South-East Asia for March/April 2006. It came under the name "4G Project feat. Franca Morgano" .

2008 : a new dance project called Phen-O-MENia used Franca's vocals on a song called Phenomenon, but the whole affair was a swindle out of her, and the single was forbidden to be released. Franca recorded a cover of 2 Unlimited's hit No Limit for compilation 90's Club Hits Reloaded Vol.2.

2009 : she is currently working on some new Magic Affair tracks.

2010 : Franca competed along with project Glitzerhaus (Lady Mata Hari & Doc Beat) to be selected for ESC 2011. Their song was entitled I Feel It All. She made music as composer and singer for Lady Pochoir, a short-movie.

2011 : In May, Franca was featured by Van Holt on the single Killer 2011. Her song Don't Stop was voted official hymn for Ladies Hockey World Championship, which took place from 4th to 11th December 2011 in St Gallen. She recorded a duet with Daniel entitled Save the World. The song competed for "Sing der Müll Weg", a campaign to preserve environment against waste, and won.

2012 : in July, she was featured on Thomas Petersen's new trance single Storm of Light. in September, Franca released an acoustic solo album in German entitled ...Nach dem Sturm. She gathered her own version of the most famous Christmas classics on an album entitled Christmas Songs Part 1.