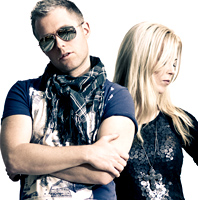 09/06/2011 : Look Twice's new single Fire was remixed by MPhasis. The result is an awesome eurodance track. You too can release your own remix of Fire. Get the acapella from one of the download sites below and put the result on Youtube as Look Twice Fire remixes, and mail the link to patrik_wincent@yahoo.se.

06/06/2011 : Look Twice organizes a remix contest for their current single Fire. This is the opportunity to create your own remix, especially if you'd like it to sound more 90s eurodance... You can get the acapella from the download sites below. You can put the result on Youtube as Look Twice Fire remixes and mail the link to patrik_wincent@yahoo.se

Look Twice includes one of Sweden's brightest singers, Veronica Larsson and a rapping duo : Wincent (alias Vinny) and Crazy G, two guys who called their music 'positive hip hop'. Upbeat tracks with unescapable hooks and some of the fastest and wittiest rap around. They established in 1992 and they made their debut with the hit single Shake That Rump in June 1993. Their second single followed one year later in spring 1994 (August 1994 for Germany) and was entitled Move That Body, officialy featuring the voice of Gladys (or more likely Zetma Prembo).

Then came the single Mr Dance And Mr Groove, probably featuring Blossom Tainton and not Gladys Del Pilar (both would later become members of Afro-Dite project).

The first album Twice As Nice came out the same year, after more than 200 public appearances. It includes tracks e.g. Go Away, Feel The Night and That's The Way (I Like It). To continue their funky spirits, several singles were released in 1995 and 1996; like Go Away or Feel The Night. These singles received excellent reviews in Billboard and went up several international charts thanks to the support from their loyal young fans throughout the world.

They say that their music is inspired and influenced by artists like Mark Morrison, Fugge's, Frank Sinatra, Treble & Bass, Prodigy and Disco from the 70's.

The album Happy Hour was released in 1995 in Japan only (label : MNW Dance Records). Raps were done by Patrick Wincent.

Early 1997 Look Twice teamed up with producer Johan Bejerholm - who previously has produced platinum selling acts like Trampolines, Treble & Bass and Family Tree - to produce their new album Celebrate. The new album contained 13 songs. Unfortunately the band had decided to change style from fast eurodance to R&B. In 1997 released second album Celebrate's first single Do U Wanna Boogie was a fiasco but the next singles gained popularity. Their singer Veronica left to create the bubble-gum project Smile.

In 1998 Look Twice returned from their second Asian tour. As the first western pop act ever, Look Twice performed on national TV and did a three week tour in major cities in China. Encouraged by the love and gifts from their Asian fans, Look Twice were ready to present their new album to the world.

2001 : Look Twice were back with a new album called 3 Is A Crowd, released in Japan only. At this time, Wincent was the only original member of the group. This album was produced by Chris Ljung and Patrik Wincent.

2008 : Imre keeps performing under the name of Look Twice, together with different artists, even if Patrick Wincent is the one who owns copyright of the name.