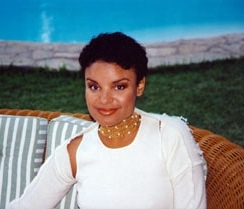 30/10/2019 : Kim Sanders was featured on York & Nathan Red's single How Did I Fall in Love?. A slow version of the track was initially published 3 years ago on York's album Traveller. (Thanks to Krasi)

25/10/2019 : Kim Sanders will play the role of Oda Mae Brown in the musical made after the movie Ghost

17/09/2019 : Kim Sanders was featured by Plan International Germany, a welfare organization to help girls and women worldwide to go to school, on song The Best Of Me.

15/10/2018 : Kim Sanders is part of the team of Vivid Grand Show as writer. Show currently takes place in Friedrichstadt-Palast in Berlin (Germany).

Kim Sanders is not only a gifted female vocalist but also a talented songwriter. Kim was born in East Chicago, Indiana, on the 24th of October 1968. She arrived in Germany as she was only 7 years old, as her granddad was in the army in Nuremberg. Her first solo single was called Full Time in 1991. The track was written by Kim Sanders, Axel Henninger and Rüdiger Meng, produced by Axel Henninger and Rüdiger Meng. The song wass not eurodance at all, it's a rock pop song. Axel Henninger later produced X-Perience Circles Of Love.

She was living in Heidelberg and dreamt to sing jazz. She needed money for her residence permit and recorded a demo in a studio in Walldorf. A technician was wowed by her vocal skills and suggested that she should siing eurodance. This is how she released her first eurodance track under the name of Flame in 1993. Entitled Next Time (I Promise), it was written and produced by Nosie Katzmann. 1994 was a very busy year for her, during which she released no more than 3 singles. Show Me reached position # 8 in the Israelian charts and # 15 in Germany, and Tell Me That You Want Me was # 11. The song Hypothetic was only a B-side. Kim recently revealed that a full-length album was planned : she had recorded many songs for it and a title had even been chosen : Intimate. But it finally never came out.

Giving up her solo carreer, she took part to different projects of the Frankfurt Connection (Jam & Spoon etc.). She contributed to Loft's debut album Wake The World (she appears on Hold On for example) and to the Steven Levis Project with Out Of My Mind performed with Nosie Katzmann. There were also 2 tracks released under her own name : Where Will You Go (I Don't Want To Spend Xmas Alone) released only on the compilation Bravo Dance Christmas (which featured all the greatest euro artists) and Food For Thought. Finally she joined Culture Beat as female vocalist and took part to their latest album Metamorphosis. She took part as a writer to many eurodance projects such as Affinity 3 or Natascha Wright.

Her hobbies are reading, videos, and aerobics.

2001 : Kim is back with a new solo single entitled (More) Food For Thought (once again written and composed by Nosie Katzmann), which is already # 20 in in Israel dance chart. She also co-wrote and performed songs for the dance project Schiller. These were unfortunately not eurodance but slow-songs : Distance and Dancing with My Loneliness. She left Culture Beat, being replaced by Jackie Sangster.

2004 : Kim decided to take a break to concentrate on songwriting and more of the business aspects of the music industry. She toured with Schiller in April. She contributed to write the lyrics of Culture Beat's single I Can't Go On.

2006 : Kim did backing vocals on What Is It About Me, a track on Sandra's last album The Art Of Love.

2008 : Kim appeared on Schiller's new album Sehnsucht. In November, she was said to be working on some new material with the help of Schiller, her album should be released next year. With Vanessa Mason (former Real McCoy vocalist) she did backing vocals on Stefanie Heinzmann ‎Like A Bullet.

2011 : Kim Sanders took part as a candidate on German real-TV show "The Voice of Germany" on Pro7 and Sat1. She released as a single Haunted, a cover that she sung during semi-final.

Canadian Eurodance
Thanks to Shimon O'Hana for the charts positions
Thanks to Nico, Apho and Tristan