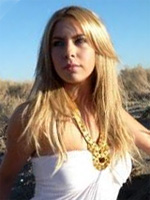 20/03/2013 : Lasgo published the videoclip of their new version of Something, featuring Taylor Jones.

07/03/2013 : Lasgo announced that they would be shooting the videoclip for their new single tomorrow. It will be a new version of Something, featuring Taylor Jones, to be released on March 20th

The Lasgo project was created by the producers and keyboardists Peter Luts and David Vervoort. The name Lasgo comes from the city of Glasgow, which is very dear to the producers... It featured the female vocalist Evi "Evy" Goffin, born on 27th February 1981 in Antwerp. She was no newcomer in the musical business : under the name of Medusa, she released a single entitled Miss You with Fiocco. She also took part to the track New Year's Day, a trance cover of U2, with 2 Fabiola. As for, Peter Luts, he has been already producing for A&S Productions for more than 5 years and did remixes for Milk Inc. David Vervoort (aka Dave McCullen) is a singer-producer-performer who had been previously DJ-ing for over 7 years in Belgian clubs and sometimes in other countries.

Lasgo hit the eurotrance scene with their first single and instant hit Something, released in July 2001. It entered the Belgian CD Singles Top10 and remained during more than 7 seven weeks, with a highest place at # 5.

Their very first live appearance took place on the Holiday Party, one of the biggest school's out party's in Belgium. TMF (the Belgian video-clip channel) recorded the show to produce a video clip. In Spain, where the track was released simultaneously, the results were great : the single was the best selling vinyl at the distributor the week of its release ! Afterwards the song was signed with Elektrola (Germany) and Positiva (UK). A videoclip was shot in Prague. 2 forthcoming singles followed : Alone (released for October 29th) and Pray.

On the 27th of October, Lasgo won the Belgian TMF Award of the best national single for Something (which sold gold). On November 19th their debut album was released : entitled Some Things, it contains 11 songs plus 2 remixes of the first singles.

2002 : Lasgo recorded 3 new tracks entitled Searching, You and I Wonder. The tracks will be on a repacked album which will also feature a lot of remixes of their hits. The release is planned for the end of this year. Lasgo's new single was at first planned to be I Wonder (its release was even set for the 2nd of September) but I could be rather Pray. The videoclip has been recorded in the US (in Long Island) and the vinyl will be released worldwide on the 14th of October. It'll feature remixes by Peter Luts, Dave McCullen, Driftwood and Kidjemet & Kovac.

Finally Pray was released in Germany on the 22nd of October, and the US on the 18th of November. It did pretty well there : in their 10th week they climbed to #46 in the US Billboard Top 100.

2004 : in February, Surrender went up to # 9 in Belgium and #5 in the German DJ Playlist, it also peaked up to #14 in the Danish Dancechart and in Finland too. Surrender was released in the UK under Positiva on the 19th of April.

At the Midem 2004 music conference in Cannes (France), Lasgo was one of the winners of the European Border Breakers award. This award, given out by the European Commision, aimed to enhance the exchange/export of popmusic across country borders.

In October 2004, Lasgo was again awarded for their hitsingle Something. At the BMI Awards ceremony held in the Ballroom of London's Dorchester Hotel they were the first Belgian act ever to receive the USA Pop 2003 and USA Dance 2003 award. The awards recognized the great popularity in the US as measured by broadcast performances and playlists. Other BMI Award winners were Sting, Seal, Van Morisson, T.A.T.U., Queen, Elton John.

The second single from the new album is called All Night long. It was released on vinyl December 20th 2004 and on CD single in January 2005. The new album is called Far Away and will most probably be released at the end of January. The vocalist/songwriter Annemie Coenen from Ian Van Dahl wrote together with Peter & David all the lyrics.

2005 : Evi Goffin is pregnant. They performed live in Copenhagen at the end of February. The Lasgo team created Lasgoline, a collection of six chairs designed by f**k design, founded by the rising star of Belgian furniture design, Marc De Gols. Every piece of furniture was named after a Lasgo song.

Lasgo's new single will be entitled Who's That Girl, featuring Dave Beyer. It should be released in June. On May 18th, the videoclip was shot in Gent. Without Evy because she's in her last month of pregnancy.

Lasgo's next single was released in November. Entitled Lying, it was beautifully remixed.

2006 : in January, Turbulence UK finished all UK remixes for Lasgo's single All Night Long. Release was planned for March 2006. A tour in the UK is planned during the months of February and March.

Ian Van Dahl and Lasgo will be coming to Brasil from 4th till 9th April 2006. The show was announced as an exclusive battle between Evi & Annemie (Ian Van Dahl). Another part of this tour should took place in the US in May and June.

Lasgo's new single in the US was Hold Me Now, scheduled to release Tuesday, June 27th, 2006.

2007 : Peter Luts started his solo project, an album is planned for this year. He released a single with Barbara Tucker called One. As for David Vervoort (aka Dave McCullen), he had a lot of success with his debut single Bitch. Evi announced that she was leaving the project. All these elements could lead fans to believe that Lasgo was over, but the management said that the project wold continue.

2008 : in May, Alex Megane released their first official cover of Lasgo's hit Something. Lasgo's search for their new vocalist was the theme of a real-TV show called Let's Go Lasgo, broadcasted on Jim TV during summer. The new vocalist was called Jelle van Daele, and the new single was Out Of My Mind.

2009 : Lasgo's new single is entitled Gone. The video was shot in Los Angeles. It went #5 in the Belgian Ultratop, the official singles chart. It was also chosen as their dance smash by Radio 538, the biggest Dutch radiostation

The follow-up single was entitled Lost and it was released in August. The video was shot in Blackpool (UK). It started immediately to climb the national charts. The new album is entitled Smile, released on September. In October, Lasgo was nominated as best dance national to the TMF Awards 2009, but did not win. They opened the ceremony, with Jelle dressed in a catwoman outfit. The follow-up single was entitled Over You.

2010 : in March and April, Jelle took part to the show Sterren op de Dansvloer on VTM. Lasgo's new single was entitled Tonight. They shot their videoclip in LA.

2011 : Besides her role as Lasgo singer and frontlady, Jelle Van Dael is also working as a VJ on Jim TV. Lasgo took part to charity project Dance 4 Life, collecting money to educate young people in order to push back the spread of AIDS and HIV. Lasgo's new single Here With Me was released in June. Videoclip was shot once again in LA.