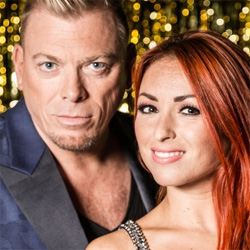 06/05/2018 : The team from De Ideale Wereld temporarily renamed Leopold II-tunnel in Brussels, with participation of 2 Fabiola...

In 1988 Patrick Claesen, aka Pat Krimson was hired as promotion boy at Antler-Subway Records in Aarschot, Belgium. At that time nobody could have dreamed that this man from Limburg would become one of the driving forces behind this company. He set up a successful record label called Dance Opera and founded the popular Flemish band Leopold 3. Patrick wanted to get his share of the dance hype and therefore began to produce dance products on his own label. One of these products was The Milky Way, the first production under the name of 2 FABIOLA (another tribute to the Belgian royal family). It was not until 6 years later that another record of 2 Fabiola (apart from Kunta Kinte, featuring Blackanova) was released, Play This Song. This extremely catching dance track soon turns out to be a mega formula for their success on the Spanish and Italian music market. The results were 4 weeks number one and for about 6 months a ranking in the official Spanish top 10. This Mega formula didn't pass unnoticed in the Italian charts either: #15 in the official Italian charts. Meanwhile, 2 Fabiola came to be a real band, gradually conquering the European continent with its extravagant looks and strong live-act.

The group involves Zohra (singer, bellydancer), who performed a nunchako dance on stage, integrated in a beautiful choreography elaborated by herself and the sexy go-go dancer Fabio (who stayed with the group until the single Magic Flight).  She helped by Carine B who does the background vocals. Apart from this duo, Pat Krimson is on stage too as keyboard man. This trio puts on a stunning 40 minutes show, making the audience wildly crazy. Andrès Romero, a well-known Belgian producer/composer/remixer from Spanish origin (who also did some remixes for Twenty 4 Seven), also took part to the creation of many hits.

2 Fabiola wants to be extravagant in different ways : the way they dress, they way they talk, the way they act. They don't want to shock anyone, they just want to be different. And different they are ! That's one of the main reasons why they are so famous.

The successor record Lift U Up became a huge success once again in Spain and Italy, and this time the Belgian charts didn't let this second success formula go by unnoticed: 5 weeks number 1, both in the Ultratop 30 and the VTW Super 50. And on the top of that, Lift U Up won an award for best Belgian production. The Golden record resulting from these magnificent sales figures, was presented on Friday, June 21, 1996 at club RIO in St.-Katelijne Waver in Belgium. The band was absolutely thrilled with this recognition and said it hadn't expected this kind of success.

In October 1996 the band launched its big Christmas offensive : a X-mas single (the  ballad Universal Love), for the Belgian market only, and a debut double album were released. The Tyfoon album, including the hits I'm On Fire, Lift U up, Play This Song and many more, now already accounts for over 25,000 sold copies in Belgium, which means a Golden record again. And while the album was selling like hot cakes, Freak Out, the new single, was being bought on a massive scale too. This up-tempo track with a squelching beat, ecstatic pizzicato tune and summery raga elements is well on its way to become the smashing hit of the spring.

Before Flashback was released, the group decided to make a pause, during which Zorah released her first solo single I Hate 2 Love U. Fabio left the group to concentrate on giving dance lessons. Pat produced some songs like Taboo Bells, My Playground,  and Paranoid In Moscow.

Flashback was a highly futuristic number, somewhere between an authentic underground club record and a hypercommercial radio hit. With a combination of genuine trance sounds, along with melancholic melodies and the goading voice of Zohra, Pat, together with her producer Oliver Adams, was again on the trail of the ultimate number one hit. The theme ? Manga, a Japanese cultural phenomenon now also becoming popular among the young of Europe. The choreography and dress, the brand-new Manga look the group has taken on, is yet another of Zohra's achievements.

Afterward they released their single Sisters & Brothers, which was not a big success because they changed their musicstyle to disco, followed by the single Feel The Vibe and the second album Androgyne. Their latest single called Summer In Space and it is featuring Medusa (who is actually Evy Goffin, who later became the leadsinger of the Lasgo project).

In 1999 Pat Krimson started a new project with Nunca, renamed Nunca Brothers in 2001. This same year, the song Es Cubells was released under Pat Krimsons name.

In September 2000 Pat Krimson moved to Ibiza with his girlfriend Ann Vervoort (ex-singer of Milk Inc.), which marked the end of 2 Fabiola and Nunca. Pat started a dance record label called Benimusa Records named after the village they were living in.

In 2001, Zohra who had gone solo as Punk City (together with producer Kris Vanderheyden behind the scenes) released her first single The Mission.

2007 : After 7 years of silence, 2 Fabiola are back. Their new single Straigth 2 The Top was released on September 3rd. It did not feature Zohra who is busy with her model, DJ, TV-series actress and TV-presentor carreer, but Katie Michaelson. The single was written by K. Michaelson, S. Lovchyld, Underscore, Pat Krimson and K. Herme, produced by Pat Krimson and Kristof Herme.

2008 : in April, 2 Fabiola were among the artists who took part to the I Love The 90s concert in Hasselt. Pat was on stage with 2 new singers Viola Furleo (who previously contributed to Basheeba and Indiana) and Loredana De Amicis. They sung some of their former hits, but also We Love the 90s, a new song composed for the party, which was released on April 1st along with a videoclip.

The new single Blow Me Away was released on June 23rd with a new video.

2009 : they had planned to release a new album in October this year, but nothing came out. In December, they released digitally a new single entitled Release Your Soul.

2010 : 2 Fabiola's new single was entitled Push It Up. It was released on July 5th. The video, shot in Ibiza, premiered on July 7th. It introduced a new face : Tamara Reynders (a vocalist from Bilzen), who replaced Loredana. The Push It Up tour started on July 17th.

2013 : Pat Krimson announced that he was working on a new 2 Fabiola single, planned for end of May. But nothing came out...

2014 : 2 Fabiola qualified for Eurosong 2014 semi-final to represent Belgium at this year's Eurovision Song Contest. Title of their song was She's After My Piano. It was finally not selected for ESC, but went viral on the web in no time. Videoclip was directed by Tim Strauwen and shot in Circus Rose Marie Malter and premiered end of April. In August, it was certified gold and won Radio 2 Zomerhit 2014. Because of She's After My Piano's success, next single One Night In Dubai was postponed to September.