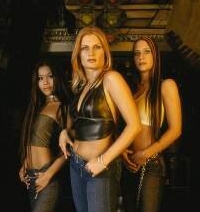 02/10/2009 : Annagrace (former Ian van Dahl) performed a song entitled Love keeps calling on Lasgo's new album release party. Will it be her next single ? (thanks to Dancevibes)

19/04/2009 : AnnaGrace's (Ian Van Dahl) first single You Make Me Feel will be licensed in the UK under Hard2Beat, the same records company which is already promoting September and Basshunter (thanks to eurodance blog). The video of her second single Let The Feelings Go was released, you can preview it here.

Ian Van Dahl was created by Christophe Chantzis and Erik Vanspauwen in the beginning of 2000. Christophe Chantzis is no stranger in the Belgian dance scene... he was already involved in projects like Absolom and Astroline in the past. Their first single Castles In The Sky was an instant hit, no only in Belgium. In Germany it reached #2 in the dancecharts, it was # 3 in UK, and in the Canadian dancechart it got up to # 1 ! Last but not least they entered the American billboard charts (highest place #78) for a few months and they got into the Top15. Some remixes were made by German DJs like Tomasso Dedonatis (Watergate, DJ Quicksilver) and Wippenberg aka Olaf Dieckmann.

The lyrics of Castles In The Sky were written and sung by Marsha (her real name is Martine Theeuwen) a 24 year old Belgian woman born October 7th, 1976 in Neerpelt. But suddenly the record company and Christophe Chantzis decided they had to replace Marsha for the public appearances, despite the fact that Marsha was really motivated to do the performances. They first found Cindy but she was soon replaced because during live acts it was too evident she was only lipsyncing. Then came Annemie (real name Annemie Anne Francine Coenen) together with the dancers Jeanine and Diana. A new version of Castles In The Sky with the voice of Annemie has been made but until now all the versions that you can buy are still with the voice of Marsha.

Besides, Marsha performed solo her version of Castles In The Sky during a 3 months tour in America in order to prove she was the one and only singer. During her stay she didn't only perform but she also got the opportunity to work with a very talented team consisting of Justin Time, Russ Reign and Marino Bragino. This resulted in a new song called Distant Places, released under the name of LD 30 featuring Marsha X.

However the Ian Van Dahl project kept on. The follow-up single to be released was Will I, in 2002. The European release was planned for August and included a Pulsedriver remix.

The 4th single was entitled Try, it was released on the 24th of September in UK.

2003 : Ian Van Dahl will release in Germany a double A-side single with the tracks Secret Love and Try at the end of March. Then they started working very hard on a new album. In April six brand new tracks were almost finished. A new single was planned for release before the summer and the new upcoming album was expected for November.

2004 : I Can't Let You Go, the new single, reached #19 in German DJ Playlist in January. The follow-up was entitled Where Are You Now and it was released in Europe and the USA, excpted in the UK. There, Ian Van Dahl will release the track Believe on the 31st of May. The new album Lost & Find will be released a little sooner, on the 24th of May.

Where Are You Now peaked in the danish dance-chart as #35.

The follow-up Believe was released in September. Then came Inspiration, which went #1 in Belgian Dance Charts in December.

2005 : In January, Annemie and Evi from Lasgo did a tour together in Japan (they played in Tokyo and in Nagoya). The February, they toured all around the UK. This special tour was a success as they were still very popular in the UK. In March, Annemie started working on new songs together with Peter & David. The new Ian Van Dahl single, planned for release before the summer, will be a brand new single not available on their current Lost & Found album.

In November, the vinyl of the new single entitled Movin' On was released and the video was shot. The maxi followed in December. It went up to #3 in the Belgian Ultratop 30 dance.

2006 : Ian Van Dahl and Lasgo came to Brazil between 4th and 9th April. The show was announced as an exclusive battle between Evi & Annemie. Another part of this tour took place in the US in May and June.

The follow-up single was entitled Just A Girl. The videoclip was shot in Paris.

2007 : the Ian Van Dahl World tour 2007 started. In early July 2007, it was announced that Ian Van Dahl's third album was completed, but instead will be released as Annemie Coenen's solo debut album produced by Peter Luts.

2008 : Jens O. did a cover of Reason. Ian van Dahl does not exist anymore, Annemie is now known as Annagrace and her first single is entitled You Make Me Feel.

2009 : Annagrace's new single is entitled Let The Feelings Go, while her first single You Make Me Feel will be licensed in the UK under Hard2Beat.