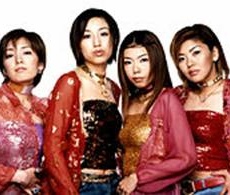 This project features 4 girls who were spotted in 1999 during the casting of a TV broadcast called Asayan (Japanaese equivalent of the Popstars reality show). Their producer Tsunku, was not very well-known at this time, but he since became one of the most well-paid in the Japanese musical business. He now stands behind many dozens of very succesful pop projects.

Tsunku was also the creator of the bands' name : the girls were trained in San Francisco, and he combined this with the word "moon". "Taiyou" means the sun in Japanese, and "to" meant "and".

Tsunku had decided that, if the group's debut single Tsuki To Taiyō (月と太陽, meaning The moon and the sun, out in April 1999) did not reach at least #6 in the charts, he would give up. Fortunately for the girls, their first single peaked #4 of sales (according to Oricon, offical sales chart in Japan). They were able to keep up their carreer, but they never reached the success of some other groups produced by Tsunku.

Next single was entitled Gatamekira (ガタメキラ). Then, only one month after, came Uchū de LaTaTa (宇宙でLaTaTa). 4th single Everyday Everywhere, released in August, was remixed to become a nice eurodance track. Follow-up was Magic Of Love.

In December 1999, they released the single Marui Taiyou - Winter Version (丸い太陽) : at this time they were only 3 girls in the group. Then in March 2000, they changed their name and became T&C Bomber : with once again 4 girls in the group.

During Summer 2000 the girls took part to some other projects produced by Tsunku (all of them being gathered under the Hello! Project banner) : the Shuffle Units 2000. Shinoda Miho took contributed to Aka-gumi 4, with the single Akai Nikkichou, Inaba Atsuko anf Kominato Miwa were featured by Aoiro 7, with the single Aoi sport-car No Otoko, Honda Ruru became a member of Kiiro 5 with the single Kiiroi Osora de Boom Boom Boom. In October 2000, the group officially split up.

Ruru went back to China and her singer career. Miwa tried to make it in a solo carreer, and Miho started modelling. Only Atsuko remained in relation with the Hello! project : she took part to the Shuffle unit of Summer 2003 called 7AIR, with the single Kowarenai Ai Ga Hoshii No.

Tsunku is now very famous in Japan. He was the creator of the very succesful project Morning Musume, which sold an amazing number of records. He also produced a lot of small groups which sometimes did not go further than the first single. For people who know the Hello! Project, Taiyô to Ciscomoon stands for the best musical quality Tsunku had ever produced.

2007 : After a carreer in Taiwan, RuRu was back to Japan with her debut solo album, Shoshin.

2008 : there are rumors according to which the band could be reformed, but nothing has been confirmed.

2009 : the band effectly reformed for a limited time to celebrate the group's ten-year anniversary, and the release of their new greatest hits album. Their first official reunion was on January 9, 2009 in Shibuya.

2013 : Up-Front Works confirmed that the project would reform (without RuRu) for a concert at Hello! Project's New Years Eve concert.

Thanks to Moonlight and Abelito

Complete your Tayio to Ciscomoon collection

More about Tayio to Ciscomoon

Listen to Tayio to Ciscomoon on Radio Euro Classic, the eurodance radio